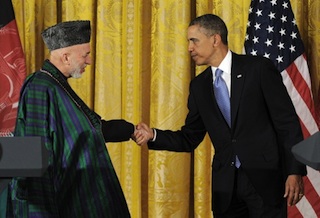 Obama and Obama: Did war on terror encourage fundamentalism?

Afghan President Hamid Karzai said on Sunday the Muslim world was “in turmoil” and wondered whether the “war on terror” led by the United States since 2001 was to blame for the radicalisation.

Addressing a forum on relations between the US and the Muslim world in Doha, Karzai declared: “The war on terror as it began in 2001 and moved forward until today has not been a happy one.”

“Have we succeeded in the war on terror?” he went on.

“Did we address the sanctuaries of terrorism? And by waging this war on terrorism, have we brought less radicalism to the Muslim world, or caused more radicalism?”

The Afghan leader said: “Today, the Muslim world is in turmoil from Pakistan up to Nigeria,” and stressed: “In my view, the West as led by the US needs to explain itself to the Muslim world.”

“If things have gone wrong, action must be taken to correct …,” Karzai said.

“In my view, there is much that we Muslims have to correct in our societies and governments, by showing more tolerance towards the rest of the world and other religions … but there is also a great deal of explanation to be done by the US and our Western friends.”

The US-Islamic World Forum, sponsored by the Washington-based Brookings Institution and scheduled to run through Tuesday, is to debate developments in Afghanistan, the conflict in Syria and the political and economic changes brought about in the countries affected by the “Arab Spring.”

Do you agree with President Hamid Karsai, that the war on terror ignited the Islamist insurgency, as we witnessed in Nigeria and other places?