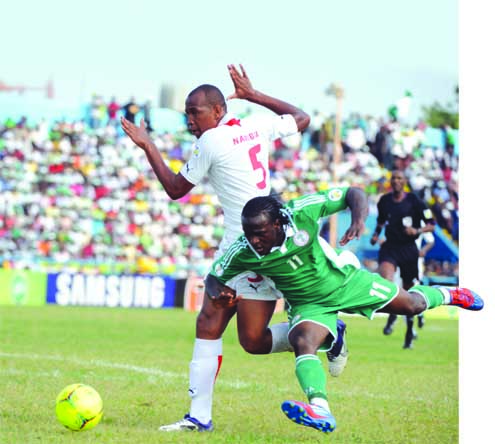 TUSSLE... Nigeria's Victor Moses (R) vies with Namibia's Angula Dacosta during an African zone of World Cup 2014 qualifier at U.J. Esuene stadium in Calabar on 3 June, 2012. Nigeria defeated Namibia 1-0. The reverse fixture holds tomorrow but Moses has been ruled out as a result of injury. AFP PHOTO

The man, who replaced Roger Palmgren as coach of Namibia, Ricardo Mannetti is drumming up support as he prepares to lead the Brave Warriors out on Wednesday against reigning African champions, Nigeria in a Brazil 2014 World Cup qualifier.

Palmgren resigned on Sunday and Mannetti has now been placed in temporary charge of the Brave Warriors.

Mannetti has quickly set heart to purpose as he held his first training session with the players on Monday.

“The situation remains the same. We are playing Nigeria and the players are aware of that. I played for this team before and I know what is at stake and have spoken to the players as well. First of all, it is pride you play for, secondly you play for the national team jersey, your family and the nation and that will be at the forefront of their thoughts,” Mannetti told namibiasport.com.na.

He stated further that the players are all united for the cause and called on the supporters to rally round the team when they face Nigeria’s superstars at the Sam Nujuoma Stadium, Windhoek.

“Coaches come and go but the national team remains and the players are committed to running out there (on Wednesday night) and performing to the best of their abilities.

“We need the support from the nation as we go into this crucial game. The only thing that has changed is Roger (Palmgren) leaving, but the situation remains the same, we have to win this game and for that we need all the support we can get,” he said.

Mannetti then revealed that there would be no wholesale changes in tactics ahead of the game.

“We have been working with these players for about two weeks now and there is no need to introduce any new ideas that can confuse players, we are sticking to our plan to get victory against Nigeria,” he concluded.

“There is no doubt that dropping a point at this stage of the competition will set the Eagles back, so we believe the Eagles’ camp will remain focused on the task ahead. We believe that another victory is achievable in Windhoek, and we stand behind you as ever to do Nigeria proud,” Globacom said in a statement.

“A win over Namibia will boost Nigeria’s World Cup dream.  We therefore encourage all the players and the coaching crew to remain determined to excel”.

Globacom called on all Nigerians to continue to support and believe in the team.

“As reigning African champions, Nigeria is suitably poised to pick the ticket to the 2014 World Cup,” the telecommunications company concluded.