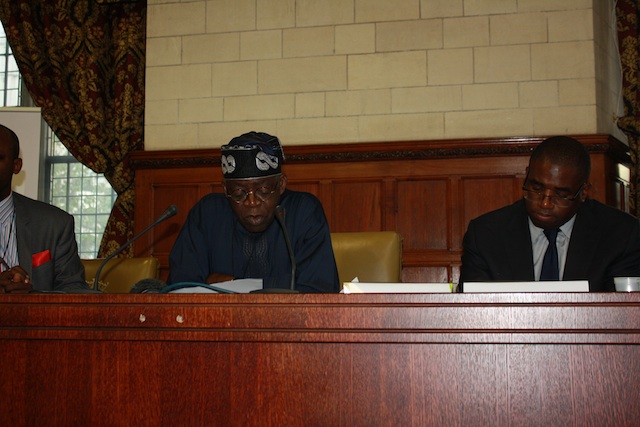 Tinubu speaks at the House of Commons conference room. On his left is MP David Lammy

In a speech delivered to a packed audience inside the Grand Committee Room , Westminster Hall, Houses of Parliament, London on Monday 10 June, the national leader of the Action Congress of Nigeria, Asiwaju Bola Ahmed Tinubu outlined what appears the sharpest policy differences between the current PDP leadership and the new political coalition of the progressives under the yet to be registered All People’s Congress, APC.

Tinubu referred to the failed policies of the PDP since 1999, as typified by unstable electricity, grave unemployment, mismanagement of the economy and insecurity. He said the abysmal record of the PDP in all the itemised areas was evidence of bad leadership.

Speaking on the theme, Leadership, National Development and the People, as a keynote speaker of the British African Diaspora Conference, Tinubu argued for a new leadership in Nigeria that can take bold steps and initiate time tested policies. He said the APC is ready to provide the necessary leadership and called on Nigerians to imitate the British that launched a Glorious Revolution more than three centuries ago, that tamed the power of the monarchy.

“The Glorious Nigerian Revolution of which I speak has nothing to do with force of arms. The Revolution of which I speak has two major parts. First, is the peaceful conversion of our quasi-democracy into a full-fledged one. Second, is the implementation of policies turning the political economy away from its retrogressive, elitist bearings. We seek policies pointing in a progressive direction affording the average person a chance at a dignified life. This will be through the provision of gainful employment, quality education and essential social services for those who need the helping hand of government to survive.

“I see no shame in believing progressive government can improve the political economy and the lives of the people. It is quite apparent to me that political leadership serves no useful function if it is unable to address the vital needs of the people. There is no question that the current Federal government has thoroughly failed in that enterprise and this explains the focus of the new opposition the APC.”

Highlighting what a future APC government will do for Nigerians, Tinubu said: “The Central focus of our efforts in the coming years must be the implementation of the most extensive and aggressive plan to lift as many Nigerians out of poverty as possible. Our desire is to be able to move at least 20% of our people out of poverty (defined as earning less than a dollar a day) in the first 4 years of our administration.”

He spoke of a policy thrust that will depart from the one laid down by the IMF and the World Bank, policies that will tackle youth unemployment, infrastructure deficit and also a free-feeding programme designed for primary and secondary school students.

“The immediate priorities will be sorting out the power requirements for all. One of the most important discoveries of humanity today is electricity. Unfortunately, Nigeria’s efforts to provide adequate energy have been an abysmal failure. Yet no nation can develop economically and meet the needs of its people without uninterrupted energy supply. How can any nation think of setting up refineries without constant power supply. Taking crude oil and exporting same cannot result in exponential growth for any country.

“To improve energy supply, we would encourage Independent Power Plants, IPP, in designated industrial zones to reduce the horrendous power component of the cost of local manufacturing.
Secondly, the construction of Trans- State highways, such as the speed train that will connect the North, South, East and West and move people, fuel, farm produce and goods, cost-efficiently across the country.

“We will emphasize and promote the growth in all sectors in the first 4 years by making small business the engine of growth. Foreign investments will ride on the back of thriving local investments, initiatives and a stable polity.

“Investment in agriculture and agro-allied industry is a must for us. We firmly believe that Agriculture will provide food for subsistence and export. Most importantly, it has the potential to create millions of jobs for both the illiterate and literate population. It is from agriculture that we can fight hunger and process raw materials for the industrial sector. It appears that every government in Nigeria has realized the centrality of agriculture, the problem has always been the absence of a forthright and creative plan, focus and commitment to implementation.

“The Federal government through supplemental funding will support States in providing Primary and Secondary school pupils with at least one meal a day. The immediate twin derivatives of this programme is the design to confront the extremely high incidence of malnutrition and other hunger -induced medical conditions amongst poor children as well as eliminating the recruiting grounds for illegal activities. Also, the program will stimulate demand thereby boosting local businesses in poultry, bakery and juice and packing industries. This will employ millions of graduates and no-graduates. Then, we can start to talk truly about the dividends of not just democracy but of impactful leadership.”

Tinubu also clarified that by calling for a revolution, he was not advocating for a violent end of the Jonathan government. He said his advocacy was that a change be effected through the ballot box.

An advocate of a free and fair election in Nigeria, Tinubu lamented the anomalies of various polls in Nigeria, since 1999 and suggested the adoption of the biometric registration and voting system, which has been used successfully in several African countries.

“The lack of a functional Biometric Voters Registration (BVR) System accounts for much of the abuse of the current process. The debate over BVR goes to the fundamental quality of our elections. With BVR we have a chance at honest elections. Without it, we are doomed to repeat past failures. This system was applied in Ghana. It worked. Other African countries – Burkina Faso, Sierra Leone, Kenya and Tanzania – used biometric registers and validation system for their general elections. It worked. If Nigeria truly is the leader and giant of Africa, let us act like it. If smaller nations can take this step to assume the continental lead in the quality and integrity of their electoral processes, let us regain the leadership role by taking the necessary step to embrace this system as well.”

The conference was also attended by MP Iban Lewis, the shadow secretary of International Development. It was hosted by MP David Lammy, representing Tottenham.