Woman bathed with acid by ex-lover 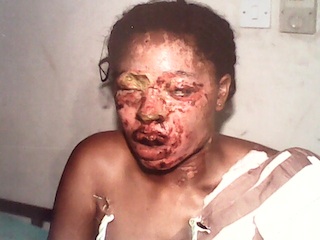 Medical doctors at the University of Benin Teaching Hospital, UBTH, are battling to give succour to a middle-aged woman, Blessing Ikhumuhi, following an acid bath on her face by her erstwhile lover.

Blessing who until the 9 April this year, was bubbling with life, was bathed with raw acid by 22-year-old Cyril Okosun a few days after she informed him of her decision to quit their romantic relationship at her Dumez-road residence in Benin City.

When the case came up for mentioning on Monday, Counsel to the accused, Fidelis Oriafo, pleaded with the Court to grant his client bail, but the Prosecutor, Inspector Victor Ehiorobo, objected to the bail on the grounds that the victim, was still in a critical condition at the UBTH.

President of the Court, Princess Esther Eweka, who rejected the bail plea, ordered that the acused be remanded in prison custody until the 23 July, 2013, when the plea for bail will come up for determination.