2014 W/Cup Qualifier: Keshi Sure Of Victory Over Namibia 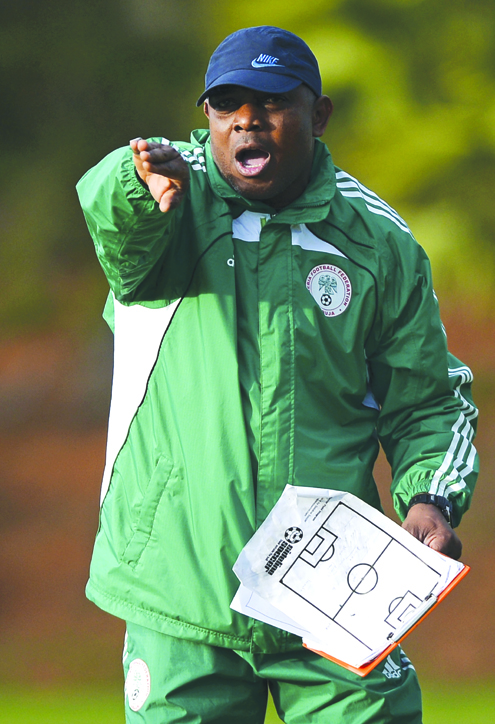 Nigeria's Super Eagles Coach, Stephen Keshi: Says he will welcome any player who will add quality to the team

Nigeria coach Stephen Keshi is confident of claiming all three points as he prepares his wards to face Namibia Wednesday night in a 2014 FIFA World Cup qualifier billed for the Sam Nujuoma stadium, Windhoek, Namibia.

Keshi, who masterminded a 1-0 victory over Kenya less than a week ago, and now plots the same against the Brave Warriors is, however, insistent that his team will need to sweat for whatever they aim to get.

“I am confident that we will achieve our objective of earning three points here. We have been training hard here since arriving on Friday and I believe the boys are itching to go into action.

“We have eight points now and can qualify with a game to spare, but we must work very hard as I don’t think the Namibians are a push-over,” Keshi said.

The Brave Warriors have been hit by the exit of their Swedish coach Roger Palmgren, 48 hours to the clash with the African champions.

Namibia Football Association officials have put the Swede’s assistants in charge, but Keshi is believes that the Namibia disarray will not do much to make things any easier.

“You can’t say because their coach has resigned the game will be easier. Sometimes players play even harder in situations like this just to prove a point.”

We will continue to prepare as hard as possible and play them like it is the final. That is the only way we can get victory.”

Malawi’s Flames host Kenya’s Harambee Stars at the Kamuzu Stadium in Blantyre same day, with the Eagles guaranteed progress should the hosts fail to win. Malawi have six points with Kenya bottom of the pool on two points.

After Wednesday’s match the Super Eagles will fly to Johannesburg on Thursday afternoon to connect a South African Airways flight to Sao Paulo, from where they will travel to Belo Horizonte for their first match of the 2013 FIFA Confederations Cup tournament, against Tahiti on Monday.

Meanwhile, Namibia’s interim coach, Ricardo Mannetti has the unenviable task of facing African champions, Nigeria without several first-team stars who have been ruled out of the tiefier for varying reasons.

There was more bad news from the injury room for Mannetti on Tuesday as it was revealed that the duo of Oliver Risser (Aldershot Town) and Manfred Starke (Hansa Rostock) will both miss the game as a result of injury and illness respectively.

Risser, recently recalled to the squad injured his knee during training while Starke has a heavy bout of flu.

The biggest absentee however is captain, Da Costa Angulo who will also miss the match due to suspension.

The Namibian skipper picked up two yellow cards in previous World Cup qualifying matches against Kenya and Malawi and is thus ineligible to face the Super Eagles.

Tags:   FIFA   Namibia   sure of victory