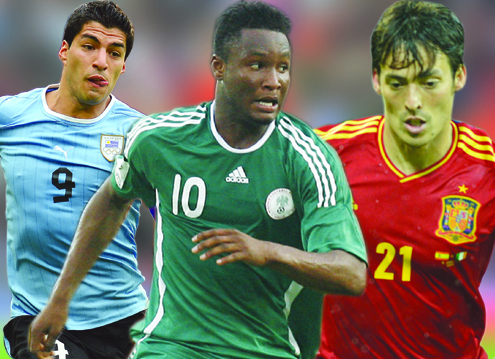 Nigeria has been placed in an extremely tough group in the Brazil 2014 Confederations Cup, which kicks off on 15 June but they will have to test their might against established fire powers like: World and European champions Spain and Uruguay to have a semi-final berth.

A simple look at the Nigerian squad by a casual observer of the game will not be shocking; their will hardly be any recognisable names. Seasoned followers will be surprised though as the likes of out-of-favoured striker, Peter Odemwingie, skipper Joseph Yobo and Obafemi Martins nicknamed Weapon of Mass Destruction, WMD are not part of the squad. Victor Moses and Emmanuel Emenike are unavailable, as a result of injury.

The current squad that would be on parade may not comprise of heavyweights but they have garnered a lot of experience from the toughest of European leagues.

The first name that sticks out is obviously that of the Chelsea midfield Trojan, John Obi Mikel. He has two European Cups to his name of course. A 26 year old by the name of Joseph Akpala plies his trade in one of the world’s most attacking leagues, the Bundesliga and will get a chance to make his name in this competition.

Anthony Ujah of Koln will also get his chance to shine in this tournament. Koln of course plied their trade in the top tier of German football until last season. John Ugochukwu and Uwa Elderson of course play in a nation which presented the Europa League with one of its finalists this season in Portugal.

However, when these names are compared to the names which Spain and Uruguay boast, one cannot simply see how Nigeria can win. Spain boasts treble winner Javier Martinez and huge chunks of the squads of Barcelona and Real Madrid. Despite the absence of Xabi Alonso, they have at least two world class stars in each position. Uruguay’s players meanwhile have played together longer than many might think. They are an experienced bunch and can boast the likes of Luis Suarez, Diego Forlan, Edinson Cavani, Maxi Pereira and Martin Caceres. The seasoned Diego Lugano remains their captain.

Only Tahiti seems to be a pushover in a group occupied by two giants of the modern game. Nigeria certainly has hope. They are after all the holders of the Africa Cup of Nations. Nigeria achieved this with a squad which consisted of quite a few homegrown players.

Also, whilst Spain is the current holder of the European and the World Cup, they are certainly not unbeatable, especially now that Xabi Alonso has been ruled out. Martinez is undoubtedly an excellent player but he does not possess much experience at international level. Bayern exposed Barcelona’s faults ruthlessly in the UEFA Champions League. Nigeria can perhaps take a page out of Jupp Heynckes’ book of tactics to beat a Spanish side which plays in almost the same manner.

Uruguay’s willingness is what has seen them come so far since 2010. They are truly a team of hardworking players; however, they are definitely also a talented bunch. Uruguay likes to be direct in attack; they have sharp shooters throughout the team. They like to play down the flanks too. Nigeria can beat Uruguay by double marking the flanks and hitting what is essentially not the fastest back four on the counter attack.

Therefore, Nigeria has every chance to beat Spain and Uruguay. The games are not decided on paper; they have to be played. They will have to prepare meticulously and execute tactics to perfection on the pitch nonetheless if they are to beat the World Champions and the South American champions. Nigeria needs to have a perfect day against both those sides; otherwise, even their best might not be enough.