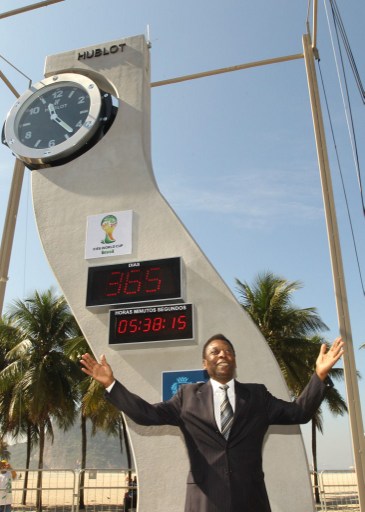 A clock designed by the late architect Oscar Niemeyer to mark the one-year countdown to next year’s World Cup was unveiled on Rio’s Copacabana beach Wednesday in the presence of soccer legend Pele.

The device, made by Hublot, the official timekeeper for the 2014 finals, displayed the time remaining until Brazil gets to stage its first World Cup since 1950 when it lost in the final to Uruguay.

“We are going to stage an excellent World Cup, we are confident,” said Pele, the country’s ambassador for the World Cup.

Jose Maria Marin, chairman of the Cup’s Local Organising Committee, hailed the unveiling as “another memorable milestone in our preparations for Brazil 2014.”

Current FIFA president Sepp Blatter could not attend but sent a message saying he was “extremely pleased”.

Brazil “is not only a footballing powerhouse, but an economic one too. I’m sure that one of the legacies of this FIFA World Cup will be that of helping Brazil become a leader in terms of social and cultural values,” he added.

The clock unveiling came three days before the start of the Confederations Cup, a two-week tournament to be contested by eight countries — Brazil, Spain, Italy, Japan, Mexico, Nigeria, Tahiti and Uruguay — asa dress rehearsal for next year’s World Cup.

Brazil will face Japan in the opening game in Brasilia on Saturday.

“I hope not to have the same experience I had when I was nine in 1950 and saw my father crying in front of the radio,” Pele said, referring to Brazil’s humiliating defeat to Uruguay in the Cup final that year.

The clock’s features were designed by Niemeyer, a Brazilian icon who passed away last year at the age of 104.