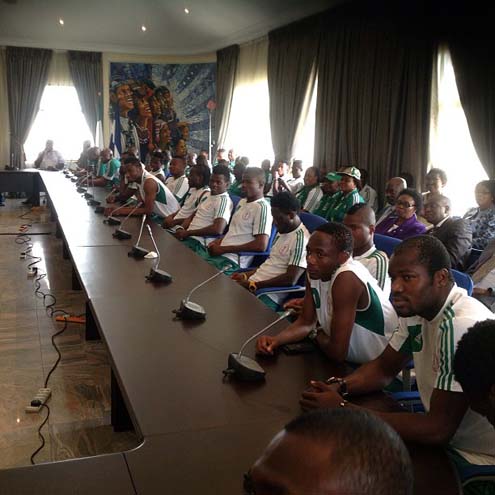 Nigeria failed Wednesday to reach the final round of 2014 World Cup qualifiers in Africa after a 1-1 draw in Namibia.

The African champions needed a win in Windhoek to take an unassailable four-point Group F lead with one game to spare.

But the ‘Super Eagles’ had to settle for a point when Godfrey Oboabona equalised seven minutes from time at Sam Nujoma Stadium.

Deon Hotto Kavendji had put the ‘Brave Warriors’ ahead on 77 minutes as they threatened to avenge a 1-0 loss in Calabar last June.

Nigeria have nine points after five rounds, Malawi seven, Namibia five and Kenya prop up the table with no wins and just three points.

So the September clash of Nigeria and Malawi becomes a group decider with the ‘Eagles’ needing a draw and the ‘Flames’ a win to finish on top.

Nigeria now switch attention to the Confederations Cup in Brazil — they face Tahiti on June 17 in Group B followed by Uruguay and world champions Spain.

Malawi were held 2-2 by Kenya in Blantyre earlier Wednesday — a result which opened the door for Nigeria to seal first place.

Malawi led twice at Kamuzu Stadium only for Kenya to get a last-minute reprieve when Chimango Kayira scored an own goal.

Striker Robin Ngalande put the home team ahead a minute into the second half on an artificial pitch and midfielder Jamal Mohamed levelled soon after.

A goal from veteran midfielder Robert Ng’ambi 10 minutes before time offered Malawi hope of a rare home win only for substitute Kayira to blunder.

The sole Malawian victory in five mini-league qualifiers was away to Namibia three months ago with all three home games drawn.