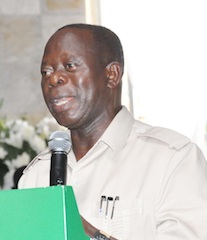 The governor who made this observation in Benin Thursday while playing host to representatives of the Stallion Group who were on a courtesy visit to him, said “Nigeria’s importation of food cannot be defended.”

According to him, “I am not particularly excited about the importation of rice. For me, Nigeria has no business importing rice. If I have the powers I will prohibit rice importation. A nation’s consumption should reflect its ability and Nigeria importing food cannot be defended. We have the capacity to produce enough rice not only for our own consumption but also for export.”

He further said that “the appropriate policy should be one that induces people like your group to produce here rather than import rice. It does not require much effort to import and in terms of our long term development strategy, we must move away from import-based to production-based economy and create jobs for our people.

“So I will be more excited discussing further how you can be involved in the production rather than providing incentives for you to import more rice. We must review these policies as it applies to importation,” he added.

Oshiomhole noted that there are businesses that are doing very well in Edo State such as palm produce, adding that “if you have interest in this area we would be quite happy to partner with you to produce more for local consumption.”

The Governor expressed displeasure at the Federal Government granting waiver to bring in various items into the country.

“I am also not too happy with the Federal Government granting waiver for people to bring vegetable oil and other forms of oil when we have enough local capacity.

“If the price of any commodity is attractive because you prohibit cheap imports, those who want to make money will go into production. That is the only way we are going to create jobs.

“Every day that we are encouraging importation, we are killing jobs, exporting employment, importing unemployment and the concomitant poverty that goes with it.”

He assured that Edo state government was ready to give the necessary incentive to the Stallion Group for them to set up oil palm farms in the state.

Briefing the Governor earlier on the activities of the group, the Group’s General Manager, Mr. Anil Matthew said they have been operating in Edo State since the past eight years.

“We feel it is time to engage more with the state. We have an auto division which as at now does not have a presence here. We are looking at the possibility of seeing how we can partner with the state and move forward,” he said.