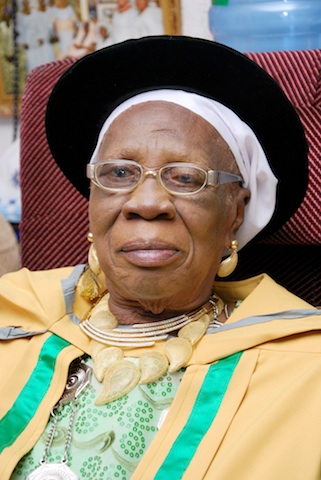 Mogaji, who was the President-General, Association of Nigerian Market Women and Men died in her home this evening at Sunday Adigun, Alausa in Ikeja, Lagos, Southwest Nigeria. She was 96 years of age and will be buried Sunday at the Ikoyi Cemetery.

Lagos State Commissioner for Information and Strategy, Aderemi Ibirogba confirmed the death of Mogaji to PM NEWS this evening, saying that she would be buried at 11 am on Sunday, adding that he was right in her house to commiserate with the Tinubu’s family.

Ibirogba said she would be buried at Vaults and Garden Cemetery, Ikoyi tomorrow while prayers would be offered for her at the Blue Roof, Lagos Television, Ikeja by 12.00 noon on Sunday.

The commissioner said the state government commiserated with the Tinubu’s family for the death of Mogaji, saying that “it is unfortunate she left us now but we take solace that she has gone to be with the Lord. She was a devout Muslim and a caring mother.
“We will always miss her. We prayed God to grant her heaven. She lived a life worthy of emulation.”

Chairman, ACN, Lagos State, Henry Ajomale described the death of Mogaji as a great loss, saying that she had contributed immensely to the development of markets in Nigeria and that her departure should be celebrated.

“She was a great woman, who lived a fulfilled life and contributed to the development of markets in Nigeria. May her soul rest in peace,” he said.

Ajomale commiserated with Tinubu for the loss of her mother, praying God to grant him the fortitude to bear the loss.

Till her death, Mogaji was the Chairman, Lagos State Market Development Board, a body established by the Lagos State Government to supervise the activities and development of markets in the state.

She was 96 years old. She was a woman dedicated a larger part of her adult life to protecting the rights of market men and women. She earned their respected having succeeded in mobilising them for greatness and innovation, and giving every market person out there a brand to associate with.

She was honoured with no fewer than 10 titles by various traditional rulers and interest groups across the nation.