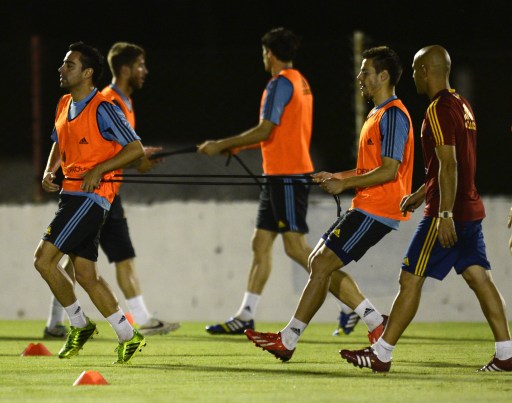 Brazil clash with Japan in Brasilia Saturday in the opening game of the Confederations Cup, an appetizer for the World Cup, which they will host next year.

Brazil are not in any way under-estimating the Asians and are indeed desirous of beating them to prove Brazilian legend, Pele wrong that the Samba boys still have the quality to beat opponents.

With Italy and Mexico, who embarrassed the Selecao in the Olympics final last summer, to come in a tough group, the Brazilians cannot afford to slip up under their 2002 World Cup-winning coach Luiz Felipe Scolari as they lay the foundations for next year’s World Cup on home soil.

Scolari has insisted since returning to the fold last November, ironically a matter of days after predecessor Mano Manezes’ Brazil side spanked the Japanese 4-0 in a friendly in Poland, that the Confederations Cup is a sideshow and that he cannot deliver a second dose of alchemy overnight.

Complaining Friday that the Brazilian media and fans are always quick to be critical, Scolari said Japan had to be respected not just as four-time Asian Cup champions but as the first side to have booked their berth at the World Cup after their draw with Australia ahead of travelling to Brazil.

“I would not be embarrassed to lose to Japan. We will play our football and play to win but if Japan did not have qualities they would not be here,” Scolari insisted to reporters in Brasilia.

“Japan are a tricky proposition and not to be underestimated. Keisuke Honda and Shinji Kagawa are superb players and the team as a whole mark you very tightly,” said Barcelona-bound Neymar.
The two-week tournament, which ends June 30, gets underway after nationwide protests over higher transport prices and amid resentment over the huge investments made for sporting events while deep social inequality festers.

A three-time winner, Brazil are aiming for a fourth title but face stiff competition from Spain, Italy, Uruguay, Mexico, Nigeria, Japan and Tahiti.

The eight teams are divided in two groups of four, with the two top teams from each group advancing to the semi-finals.

If Brazil win Group A, they will then travel to Belo Horizonte — for a June 26 semi-final against either reigning South American champions Uruguay or African champions Nigeria, assuming current World Cup champions Spain win Group B.

But a young Brazil squad, under Luiz Felipe Scolari and currently in 22nd place in the FIFA rankings, first needs to get past four-time Asian Cup champions Japan.

“We need to beat Japan,” coach Scolari said Friday. “Losing the first game puts you in an very uncomfortable position.”

Brazil’s young prodigy Neymar, who has just signed for Barcelona from Santos, warned that the Japanese, coached by the hugely-experienced Italian Alberto Zaccheroni, should not be taken lightly.

The two teams have met nine times since 1989, with seven wins for the Brazilians and two draws.

The Confederations Cup is seen as a key test of Brazil’s readiness to stage its first World Cup since 1950 a year from now.

All eyes will be on Neymar, widely viewed as Pele’s heir apparent, who has come under fire from the demanding Brazilian fans for failing to score a single goal in nine games for club and country.

“We are going to do our very best to win, not only to win the Confederations Cup, but more importantly the World Cup (next year),” said the flashy 21-year-old star, with his eccentric, perpetually changing haircut.

On Friday, Scolari, who led the Selecao to a record fifth World Cup in Tokyo 11 years ago, sprang to Neymar’s defense, telling reporters: “He does not wear 11 jerseys but one — he is part of a team.

“He has done what is requested of him with a lot of dedication,” he added. “We want him to be a useful, team player — that is what makes a good player.”

The build-up to the tournament has been overshadowed by at times violent demonstrations in several cities over higher mass-transit fares and the high cost of organizing the sporting events.

Police made hundreds of arrests in Sao Paulo, Brazil’s business capital, as well as Rio de Janeiro and Porto Alegre after thousands of youths blocked thoroughfares to protest hikes in transport fares.

Authorities in Sao Paulo condemned acts of vandalism by angry youths but also promised an investigation into charges of police brutality.

In Brasilia, 400 homeless activists burned tires and blocked access to the National Stadium, one of the six host arenas for the Confederations Cup, to protest what they see a land grab by authorities to prepare for the major sporting events.

Many people are frustrated at the millions being spent on the football facilities – $475 million dollars for the Brasilia arena alone – rather than on reducing deep social inequality.

Some 355,000 Brazilians and foreign tourists are expected to watch games in the six host cities: Brasilia, Belo Horizonte, Fortaleza, Recife, Rio and Salvador.