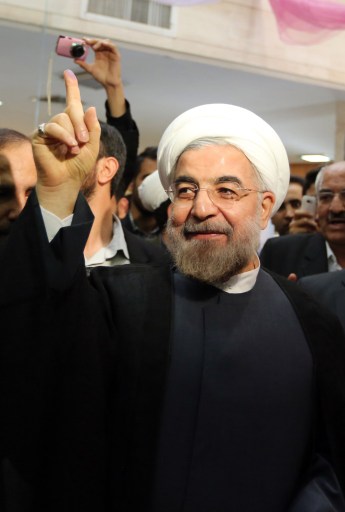 Hassan Rowhani’s election as Iran’s new president, backed by both moderates and reformists, gives a shot in the arm to a reform movement long sidelined by regime pressure.

“The slow death of reformists in Iranian politics has been partly halted by this very clear victory for Mr Rowhani,” said leading conservative analyst Amir Mohebian.

He largely owes his victory in Friday’s election to the withdrawal of sole reformist candidate Mohammad Reza Aref three days before the vote.

That, and former popular reformist president Mohammad Khatami calling on voters to mobilise behind Rowhani, secured his victory in the face of five conservative opponents who failed to unite.

He was given a further boost after a call to back him by another reformist former president, Akbar Hashemi Rafsanjani.

“Though hardliners remain in control of key aspects of Iran’s political system, the centrists and reformists have proven that even when the cards are stacked against them, they can still prevail due to their support among the population,” Trita Parsi of the National Iranian American Council told AFP.

Since 2009 and the repression of public protests that erupted after the disputed re-election of President Mahmoud Ahmadinejad, reformists have been isolated and subjected to unprecedented pressures.

Scores of reformist leaders have been arrested.

Mir Hossein Mousavi and Mehdi Karroubi, the two presidential candidates alleged the result was rigged and urged their supporters to take to the streets.

Both men have been under house arrest for more than two years.

But in recent months, reformists led by Khatami have raised their heads warily above the parapet.

“With Rowhani’s victory, there will no longer be pressure against them as long as they choose not to take an extremist stance,” said Mohebian.

“The reformists must know that to submit Rowhani, who has always been at the centre of things politically, to excessive demands will destroy opportunities created by this election, as happened under Khatami,” who was president between 1997 and 2005, he added.

Near the end of Khatami’s term some reformists tried to push him to choose the path of confrontation.

“One of the first demands the reformists could make is that Mousavi and Karroubi be released,” a moderate official told AFP, speaking on condition of anonymity.

“This would put Rowhani in a difficult position and create a problem for him in the heart of power.”

After Rowhani’s election victory was announced late on Saturday, some of the thousands of people gathered in central Tehran called for freedom for Mousavi and Karroubi.

“He will have to neutralise extremists in both the reformist and conservative camps if he wants to avoid problems,” said Mohebian.

This could turn out to be a tightrope walk for a new president who must avoid being caught in any crossfire.

“Rowhani will use some reformists who have great expertise, but not those who were involved in the events of 2009,” Tehran-based political analyst Mohammad Saleh Sedghian told AFP.

“In fact, more than the reformists, it is former president Rafsanjani who will have great influence in Rowhani’s government which will be the one of national unity,” he predicted.

That would satisfy Khatami, undisputed leader of the reformists.

Last year, he set up a new body dubbed an advisory council, bringing together main reformists as a way of preventing divisions and defining the movement’s aims.

Khatami and Rafsanjani working together should push reformist factions towards a position of moderation.