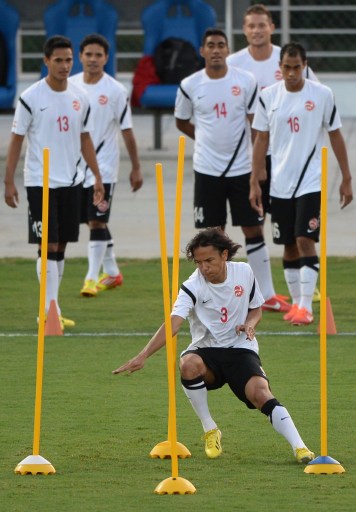 BELO HORIZONTE (AFP) The 2013 Confederations Cup now has its full complement of eight teams after Nigeria’s Super Eagles belatedly arrived in Brazil on Saturday night, hours after the start of the tournament.

The African champions had been due to arrive on Thursday, but a dispute with the Nigeria Football Federation (NFF) over bonus payments meant the squad missed their initial scheduled flights.

The players were angry that they were only offered a bonus of $2,500 (1,873 euros) for their 1-1 draw with Namibia in World Cup qualifying on Wednesday.

However, despite ongoing discord, the squad finally arrived at their Belo Horizonte hotel at around 03:00 local time (06:00GMT) on Sunday, having flown in from Windhoek in Namibia via Johannesburg and Sao Paulo.

The delay means that coach Stephen Keshi has barely 36 hours to prepare his side for their Group B opener against Oceania minnows Tahiti on Monday.

The squad are scheduled to have their first training session in Brazil later on Sunday.

The jet-lagged Eagles will face minnows Tahiti in their Confederations Cup opener on Monday, with fears being expressed that the Eagles could be walloped, having got not much time to prepare.

Tahiti became the first team to arrive in Brazil for the intercontinental showpiece when they touched down on June 7, a full 10 days before the Group B clash with African champions Nigeria in Belo Horizonte.

A row over bonus payments had put Nigeria’s participation in jeopardy, only for sports minister Mallam Bolaji Abdullahi to broker a truce between the squad and the Nigeria Football Federation (NFF).

The Super Eagles have nonetheless gone 17 games unbeaten and will expect to open their campaign with victory against a side ranked 138th in the FIFA ranking.

Representing the French Polynesian islands in the south Pacific, which have a population of just 270,000, Tahiti have no previous senior tournament experience.

Their preparations have included a 7-0 thrashing by Chile’s under-20 side and a 1-0 loss to Brazilian second-tier club Mineiro, and forward Steevy Chong Hue knows his side could be set for a rude awakening.

“For an amateur player, it is a dream to face the best players in the world,” he said.

“However, for it not to become a nightmare, we have to keep working really hard so we are ready for the first game.”

Despite the vast disparity between the sides, Nigeria defender Efe Ambrose says the risk of international humiliation will keep his team-mates on their toes.

“We cannot afford to take any chances,” the versatile Celtic player told the FIFA website.

“Big shocks have happened before in these kind of tournaments and we don’t want to be the victims this time.”

Tahiti, who qualified by winning the Oceania Nations Cup, will hope to draw inspiration from the venue of Monday’s game, which was the scene of the United States’ shock 1-0 victory over England at the 1950 World Cup.

Home to Brazilian sides Cruzeiro and Atletico Mineiro, the 62,547-capacity Estadio Mineirao has undergone an extensive overhaul in preparation for the Confederations Cup and next year’s World Cup.

Tahiti coach Eddy Etaeta will hand a debut to former Monaco forward Marama Vahirua, the squad’s only professional player, whose commitments in Europe have prevented him from playing at international level before.

Nigeria will be without Lazio midfielder Ogenyi Onazi, who has followed Spartak Moscow striker Emmanuel Emenike and Chelsea winger Victor Moses in withdrawing from the squad due to injury.

The opening Group B fixture takes place on Sunday, when Spain tackle Uruguay in Recife.