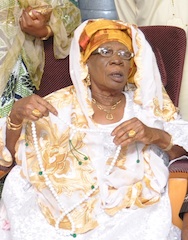 The remains of Alhaja Abibat Mogaji, the mother of the Action Congress of Nigeria, ACN, National Leader, Asiwaju Bola Tinubu, was today buried at the Vault and Garden Cemetery, Ikoyi, Lagos, Southwest Nigeria.

Mogaji, who was the President General, Association of Nigerian Market Women and Men died in her home on Saturday at Sunday Adigun, Alausa in Ikeja at the age of 96.

Prayers were offered for her at the Lagos Central Mosque, Lagos by the Chief Imam of Lagos State, Alhaji Garuba Akinola, who was represented by Alhaji Mujitabah Giwa.

In his sermon, the cleric said there were many things to emulate in the life of Mogaji as she lived an exemplary life worthy of emulation and urged all to emulate her good virtue.

“God owns our beginning and the end. She had impacted much in the lives of the people positively and her life was worthy of emulation,” he said.

The service at the mosque ended around 11:30 am while the body of Mogaji was taken to the cemetery in white coffin but she was removed from the coffin before she was lowered into the grave in accordance with Islamic injunction.

At the grave side where she was buried, the cleric offered prayers for the repose of the deceased soul before she was lowered down the grave, saying that everyone would die at a particular point in time.

After the burial, attention shifted to the Blue Roof, Lagos Television, Ikeja, where special prayers were offered for the repose of the deceased, while the event was well attended.

Speaking with newsmen after the burial of his mother, Asiwaju Tinubu described her Mother, Mogaji as a successful woman, a good leader, mother in Nigeria, good thinker, compassionate and a committed democrat.

The former governor said there were many lessons women could learn from the life of Mogaji, saying that “as women leaders of the society, they have to continue to plan together, share issues, share discussions and look at the right direction. Commitment to the education of their children is the best weapon against poverty and ignorance. Once you get out of that, definitely the nation will benefit and progress.”

Tinubu said further that the late Mogaji was the reason behind the payment of secondary school students’ West African Examination Council, WAEC’s fees in Lagos State by his administration.

“I was so touched when she brought some women to me that I should pay for their children’s WAEC fees. Then I was the governor and I decided afterwards that henceforth, I will be paying for the examination fees of school children either rich or poor in Lagos State,” he stated.