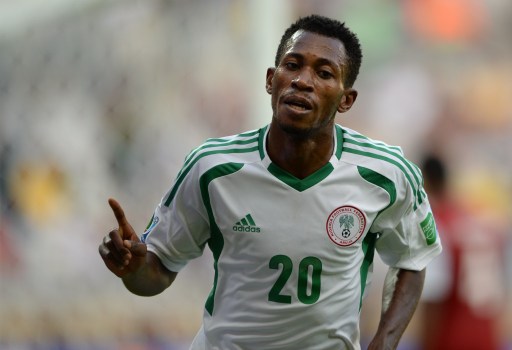 The African champions only arrived in Brazil 36 hours before the game after a row over bonus payments, but they could even afford some wasteful finishing as they leapfrogged world champions Spain to the top of Group B.

It was a predictably chastening experience for Tahiti, ranked 138th in the world, but they were nonetheless able to celebrate when Jonathan Tehau headed in their first ever goal at a high-profile international event.

Tehau’s goal, early in the second half, trimmed Nigeria’s lead to 3-1 after a deflected Uwa Echiejile shot and a pair of goals from Oduamadi had put Nigeria in command.

However, the south Pacific islanders’ hopes of a famous comeback were dashed as Tehau put through his own goal before Oduamadi and Echiejile added further goals to give Stephen Keshi’s men a spring in their step ahead of Thursday’s crucial showdown with Uruguay.

There were only 20,187 people in attendance at the newly renovated Estadio Mineirao but they were vocal in their support of Tahiti, who were granted a standing ovation at the end of the game.

“I’m very proud of the team, who fought to the end,” Marama Vahirua, Tahiti’s only professional player, told Brazilian television.

“We came here with the goal of winning the hearts of the fans. The Brazilian public has adopted us and it makes us very happy.”

There were roars of encouragement when Tahiti full-back Vincent Simon registered the game’s first shot on target in the second minute, but fortune deserted the underdogs moments later.

After the ball bounced off referee Joel Aguilar, Echiejile launched a speculative shot that deflected off Tehau and captain Nicolas Vallar and ricocheted past Tahiti goalkeeper Xavier Samin.

Oduamadi added two more, neatly side-stepping a pair of challenges and sweeping home in the 10th minute, before tapping in his second when Samin spilled a low cross from Ahmed Musa.

Nigeria made heavy work of putting the game to bed though, with Musa, Anthony Ujah and Sunday Mba all failing to convert glaring opportunities before the goal that Tahiti had been threatening arrived in the 54th minute.

The honour fell to Tehau, who headed in a deep corner kick from Vahirua at the back post and then led his ecstatic team-mates in a canoe-paddling celebration.

The goal also sparked jubilation on the bench, coach Eddy Etatea leaping from the dug-out with his fists in the air, but Tehau’s day took a turn for the worse in the 68th minute when he inadvertently toed the ball into his own goal to restore Nigeria’s three-goal advantage.

Oduamadi tucked in a cross from substitute Brown Ideye to complete his hat-trick in the 76th minute, with Echiejile adding a sixth shortly after as Tahiti’s reserves of resistance finally ran dry.