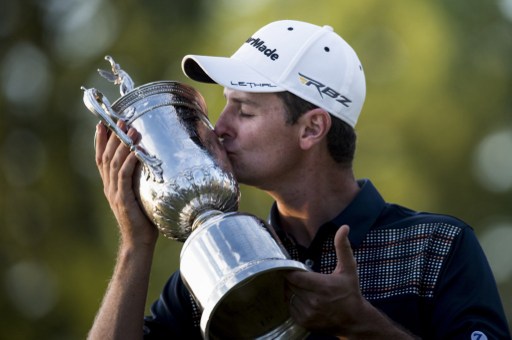 Justin Rose of England kisses the trophy after winning the US Open during the fourth round at Merion Golf Club June 16, 2013 in Ardmore, Pennsylvania. AFP

ARDMORE, Pennsylvania (AFP) – Justin Rose became the first Englishman to win the US Open since Tony Jacklin in 1970 with a tension-packed par-70 final round Sunday that delivered his long-sought first major title.

Rose, a 32-year-old who was born in South Africa, clung to a one-shot lead when he put his 18th-hole tee shot in the fairway near a plaque where legend Ben Hogan hit a famed one-iron shot to seal a 1950 US Open victory at Merion.

“When I saw my shot lying in the fairway, I thought, ‘This is my moment,'” Rose said. “I’ve seen the Hogan photograph a million times and now it was me hitting the shot. I hit a 2-iron into the green and it all worked out.”

The ball rolled to the back edge of the green and Rose used a hybrid to knock the ball an inch from the cup and tapped in for par to take the clubhouse lead, although his triumph was not yet secure.

Mickelson, the three-time Masters champion who sought his first US Open title after five runner-up efforts, came to 18 needing a birdie on his 43rd birthday to force an 18-hole Monday playoff with Rose.

No player in the third or fourth rounds had managed a birdie at the fiendish finishing hole and the US left-hander did not help his chances when his tee shot found the left rough and his approach was short of the elevated green.

When Mickelson’s third shot sped inches to the right of the cup, Rose had his long-sought win in his 37th major start and on Father’s Day.

“For it all to work out for me, it was such an emotional day, I couldn’t help but look up at the heavens and think my old dad had something to do with it,” Rose said.

Rose had received an encouraging and prophetic e-mail message from pal Adam Scott after the Aussie won his first major title two months ago at the Masters, saying, “You’re time is coming soon.” It could not have come any sooner.

Rose, 32, produced his best prior major finish of third at last year’s PGA Championship, although he might have been best known for his share of fourth at the 1998 British Open as a teen amateur.

“For me it’s very heartbreaking,” Mickelson said. “This week, I thought, was my best opportunity. This is probably the toughest for me because at 42, to be so close, you know, it was really set up for me.”

Mickelson, who made a stunning eagle at the 10th from 76 yards, lamented numerous birdie chances that went wanting, notably lipouts on the first two holes, and double bogeys at the third and fifth.

“I should have made bogeys at those holes where I made doubles,” he said.

The back-nine title hunt came down to Mickelson, Rose, Day and Mahan.

Rose missed a 13-foot par putt at the 16th and fell into a share of the lead at one-over with Mickelson and Mahan with Day only one shot back.

At the 15th, Mickelson botched a wedge and he and Mahan each missed long par putts. Mickelson made a two-footer for bogey but Mahan missed from three feet and made double bogey.

Day, the 2011 US Open and Masters runner-up, missed a four-footer for par at the 18th and that left him with a final-round 71 in the clubhouse on 283, level with Mahan but one back of Mickelson and two adrift of Rose.

Mahan took a bogey at 17 and only Mickelson could deny Rose from there, but instead, he found only heartache.

“It was a very good week overall,” Woods said. “I’m just sorry the golf was not where I would have liked it to be.”

Donald hit a woman with his tee shot at the third hole on his way to a bogey and was undone after that, with four more bogeys and a double bogey on the rest of the front nine alone.

Stricker, who at 46 would have been the oldest champion in US Open history, went out of bounds off the second tee and shanked his approach on the way to a triple-bogey eight, a career worst one-hole score that helped doom his dream.