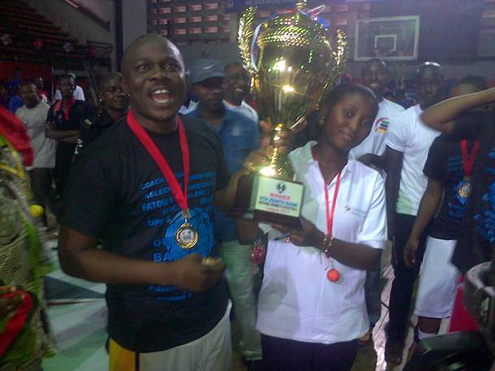 Owner of First Deepwater, Babatunde Babalola, right, holding the league trophy with one of the fans of the team after the final match yesterday

Both players and coach of First Deepwater club of Lagos, Lateef Erinfolami, were full of excitement over the weekend after the club became the champions of the Nigerian women’s basketball League for the fourth year successively.

The defending champions, owned by First Deepwater Discovery Limited, defeated the surprise team of this year’s edition of the league, Dolphins club of Lagos 82-74 in the final match played inside the Indoor Sports Hall of the National Stadium in Surulere, Lagos.

The Deepwater team, who were pundits’ favourite to win the title after former champions, First Bank club, were ousted by Dolphins in the semi final, had to rely on experience to see off a determined Dolphins team in the fourth quarter of the pulsating match.

Speaking after the match, coach Erinfolami attributed his side victory to dedication and total commitment of the players and management of the modest side who stormed the Nigerian scene in December 2008.

“I am highly delighted that we are able to build on last year’s achievement when we won the trophy for the third time. A lot of people have doubted our ability to sustain the tempo after other teams re-inforced their squads but today, we have proved our critic wrong with another title in the kitty,” the former national team player said.

The coach dedicated the victory to the players for their commitment and thanked the club management for always being there for them even in tough times.

He said: “We will not be where we are today without the unflinching support of our management, the players and all our fans out there.

Today’s credit goes to everyone that has contributed immensely towards this successful season. I cannot mention names right now.”

He further stated that the team will be fortified ahead of their continental club engagement stresssing that their focus now is to win title at the continental stage.

Speaking after their hard-earned victory, Nkechi Akashili, who won the Most Valuabale Player award for the fourth successive season, said the players had promised to win the trophy for their fans and the owner of the club, Babatunde Babalola.