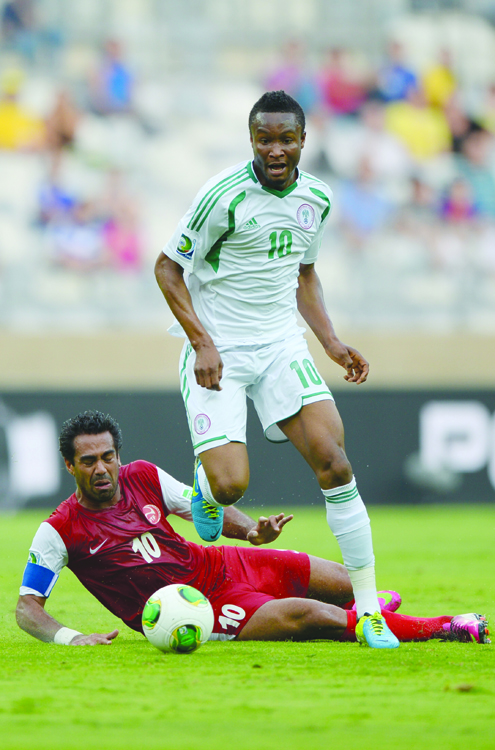 African champions Nigeria, as expected, beat minnows Tahiti 6-1 in their Confederations Cup opening Group B match on Monday in Belo Horizonte, but they were slammed over their wastefulness.

The entire team came under serious criticism over their shyness in front of goal against a makeshift Tahitian team.

Two ex-internationals, Etim Esin and Henry Nwosu flayed the team for not utilizing the litany of goal scoring chances that came their way warning them to up their game if they want to qualify for the semi-finals ahead Spain and Uruguay.

Esin stated further that the performances put up by the Eagles was below expectation, adding that the coaching crew need to make changes in the team ahead of their next game.

“I am impressed with the result we got in our first match against Tahiti but I am not totally comfortable with the performance of our players, especially in front of goal,” Esin fumed.

Corroborating Esin’s stand, Nwosu said Eagles could have scored more than 10 goals if they had used their chances and avoided selfish plays by some of the players. “The standard put in by the Super Eagles is worth more than six goals because as far as I’m concerned, if they had been more coordinated upfront and avoided the selfish plays by few of them especially Ahmed Musa, Brown Ideye, John Ogu, Anthony Ujah among others, the goal tally would’ve gone up to 10 goals or more,” Nwosu opined.

Adding his voice to the growing criticism of the team, the newly appointed coach of Sunshine Stars of Akure, Fatai Amoo, who believes the solution to Eagles’ profligacy in front of goal is to be calm and shoot at goal.

According to him  “We won against Tahiti but our players played below expectation. The finishing was poor but I expect the team’s handlers to work on them before the next match against Uruguay on Thursday. In all, what really matters most is the fact that we started on a winning note.”

Nigeria lead Group B on three points the same points as European champions, Spain but on superior goals. Elderson Echiejile scored a brace while Nnamdi Oduamadi achieved a hat-trick and Tahiti’s hitman, Jonathan Jehau who pulled one back for his side later scored an own goal to complete the 6-1 routing.