NBA: Spurs to go for broke in Game Six 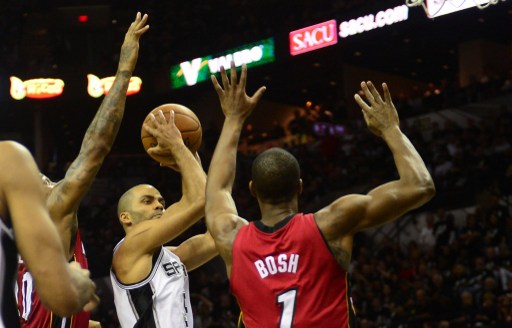 Tony Parker (C) of the San Antonio Spurs shoots under pressure from Chris Bosh (R) of the Miami Heat during game 3 of the NBA finals on June 11, 2013 in San Antonio, Texas. AFP

MIAMI(AFP) – The San Antonio Spurs are making a habit of winning bounce back games in the 2013 National Basketball Association playoffs.

The Spurs have lost four games in the post-season and each time they have rebounded with an impressive victory.

The series now shifts to Miami, where the Spurs can clinch their fifth title in franchise history with a win Tuesday at American Airlines arena.

“It is going to take everything we’ve got,” said Spurs game four hero Danny Green.

All five Spurs starters finished in double figures Sunday, including Manu Ginobili and Green, who had six three pointers to break Ray Allen’s all-time record for the most three pointers in the NBA finals.

“I hope he doesn’t wake up and keeps playing this way,” said Spurs Tim Duncan of Green, who scored 24 points and now has 25 three pointers in the 2013 finals.

“We are asking him to defend LeBron James, Dwyane Wade and all these guys. He has got a lot on his shoulders and he has stepped up and answered the bell.”

Ginobili, who was starting his first game of the post-season, had a season-best 24 points and 10 assists.

“He has confidence in himself and he should just continue to compete,” Spurs coach Gregg Popovich said of Ginobili. “That’s what he has done his whole career.”

Ginobili finished with 20 points and 10 assists just once previously in the playoffs and that came in 2007 in the semi-finals against Utah.

The Heat’s marquee trio of James (25 points), Wade (25) and Chris Bosh (16) were effective but not enough to allow Miami to ever take the lead in game five.

Miami is at home and on the brink of elimination for the second time in three NBA finals.

“We are going to see if we are a better ballclub and if we are prepared for the moment,” Wade said.