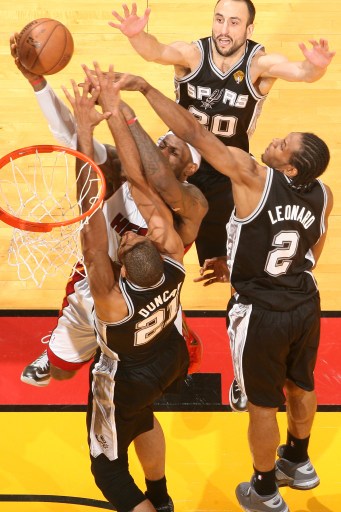 With the Spurs ahead by five points, 94-89, with just 28 seconds left in the fourth quarter, American Airlines arena officials began surrounding the playing surface with yellow tape to keep the spectators from rushing the court.

James said once the Heat players witnessed the decorations going up they decided the Spurs weren’t going to partying on their home court.

“There’s a few guys in the locker room (after the game) that talked about it,” James said. “We saw the championship board already out there and the yellow tape.

“That’s why you play the game, to the final buzzer. And that’s what we did tonight. We gave it everything that we had and more.”

Ray Allen drained a three pointer with five seconds left to send it into overtime and James hit the game-winning jump shot with 1:43 remaining in overtime as the defending NBA champs rallied from a 13-point deficit to beat the Spurs 103-100 and forced a game seven.

James was brilliant in game six finishing with 32 points, 10 rebounds and 11 assists for his 11th career playoff triple double. James had 23 points in the second half after scoring just nine in the first half.

“I was just trying to be aggressive and help the team get back into the game,” said James, who posted his fourth career finals triple double.

The Heat staved off elimination and now have a chance to win their second title in a row if they can pull out a victory in game seven Thursday at home.

Thursday’s deciding game will be the 18th game seven in NBA finals history and the third since 2005. The home team has won 14 of the previous 17 game sevens.

Four time league MVP James called game six — which had eight lead changes — the most satisfying game he has ever been involved in.

“It was by far the best game I’ve ever been a part of,” James said. “The ups and downs, the roller coaster, the emotions, good and bad throughout the whole game.

“To be a part of something like this is something you would never be able to recreate once you’re done playing the game.”

Miami all-star Dwyane Wade was playing on two balky knees and he appeared to re-injure his left knee in the first quarter so he wasn’t able to give James much help on offence.

But the Heat’s supporting cast came up huge, including former Boston Celtic Allen who missed his first four shots from the field Tuesday before finishing with nine points, all coming in the fourth quarter and overtime.

“My focus is to help this team win,” Allen said. “We put ourselves in the situation we are in. Good or bad we are going to fight to try and make it to the top.”

Kawhi Leonard scored a career playoff high 22 points and Mario Chalmers matched his 2013 post-season high with 20 points for the Heat who are a perfect 7-0 in games following a loss in the 2013 playoffs. The Heat have not lost back-to-back games since early January.