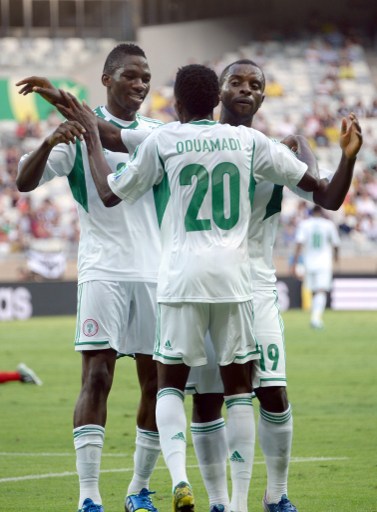 Nigerian players celebrate a goal: will they celebrate against Uruguay on Thursday?

SALVADOR (AFP) – Despite contrasting results in their opening games, Uruguay and Nigeria both approach Thursday’s encounter between the sides in Salvador knowing defeat could spell the end of their Confederations Cup ambitions.

Uruguay lost 2-1 to Spain on Sunday, before Nigeria surged to the Group B summit with a 6-1 demolition of minnows Tahiti, but the meeting of the South American and African champions was always destined to be pivotal.

With both teams expected to lose to world champions Spain and beat Tahiti, a win at Arena Fonte Nova would leave the victors in a very strong position to progress to the last four.

Speaking prior to the Spain defeat, Uruguay coach Oscar Tabarez had described the Nigeria fixture as “our key match”, while captain Diego Lugano said the game was “our final”.

Striker Diego Forlan echoed their sentiments, although a draw would leave the qualification situation in the balance ahead of Uruguay’s final group game against Tahiti.

“Losing to Spain is something normal. Now we must forget that match and prepare ourselves to play against Nigeria,” said the talismanic striker, who now plays for Brazilian club side Internacional.

“We knew before coming to Brazil that our most important game was against Nigeria and nothing has changed because we lost to Spain.”

Nigeria’s preparations for the tournament were dogged by controversy after the squad initially missed their scheduled flights to Brazil in protest at a row over bonus payments.

Coach Stephen Keshi said he was relieved to put the furore behind him with the one-sided victory over Tahiti, although he was critical of his forward players for not putting the game to bed more quickly.

“I wouldn’t say I was annoyed, but I was worried when we did not take our chances because it gave our opponents hope,” he said.

“We had clear chances, 100 percent chances, and you need to bury the goals.”

Keshi hopes to have Lazio midfielder Ogenyi Onazi available, after he missed the Tahiti game in order to undergo treatment on a knee injury in Nigeria.

Although Uruguay’s players were made to look statuesque by Spain’s passing carousel during their opening match in Recife, Luis Suarez did give the South Americans’ fans a moment to cherish with a fine late free-kick.

The talented Liverpool striker will be central to Uruguay’s hopes of success in Salvador, and he is confident that his countrymen will rise to the occasion.

“Us Uruguayans are used to having it tough. For that reason, we’re really not worried,” he told the FIFA website.

“You just have to look at how we went into the last World Cup (in 2010, when they qualified via the play-offs) and also the result we just picked up in Venezuela (a 1-0 win in World Cup qualifying on June 11).

“Uruguay can go toe to toe with anybody. We’re fully aware of that. We might have had a setback against Spain, but there’s still a long way to go and we’re going to bounce back.”

The old stadium, home to local club sides Bahia and Vitoria, was demolished in 2010.