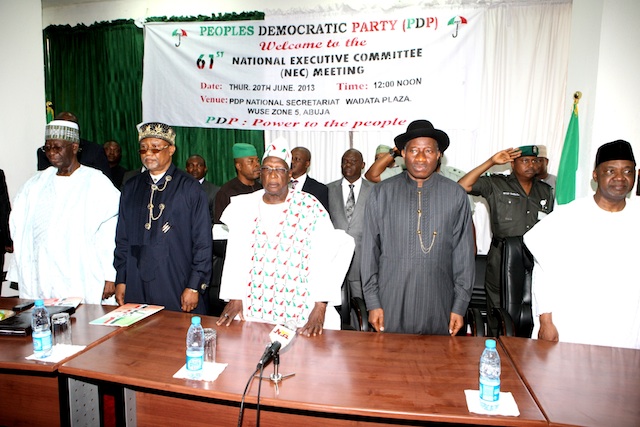 Intrigues threatening to tear apart Nigeria’s ruling Peoples Democratic Party, PDP continued on Thursday as Alhaji Bamanga Tukur was retained as the chairman of the party at the end of a meeting attended by President Goodluck Jonathan.

His retention contradicted feverish speculations in the media that he will be booted out by at the meeting of the highest decision making organ of the party.

The PDP NEC also passed a vote of confidence on President Goodluck Jonathan at the meeting. But the NEC meeting which was also attended by 18 Governors of the party ended without any talk of opposition to the continued stay of Alhaji Tukur in office which was held behind closed doors, according to sources.

It was however gathered that the groundwork to ensure that the party chairman survived the plot to remove him from office was perfected in a series of meetings held on Wednesday night.

While Tukur survived, the resignation of 12 other members of PDP NWC whose election the Independent National Electoral Commission, INEC violated the guidelines for the congresses and national convention was accepted at the meeting.

Olisa Metuh, the outgoing National Publicity Secretary, moved the motion announcing the resignation of the 12 affected NWC members. The motion was immediately adopted and the concerned NWC members were escorted out of the venue.

Also, Tony Okeke was appointed as the Ag. National Publicity Secretary while Simon D. Jok was appointed as the Ag. The party also stated that it will hold a mini-national convention to endorse the changes in the National Working Committee (NWC) following the resignation of some of its members which was adopted by NEC in Thursday’s meeting on 15 July.
This will be preceded by zonal congresses of the party nationwide on 13 July.

While delivering his opening remarks at the meeting, President Jonathan said information in his possession indicated that the recent killings in Zamfara State was purely ethnic cleansing and not the handwork of the Boko Haram insurgent group.

He wondered why ethnic groups that have lived together for several decades resort to killing themselves. The President also scored himself high on efforts to restore the nation’s economy.

In the confidence motion moved by Senator Ibrahim Mantu and unanimously adopted by all members of the committee at today’s PDP NEC meeting, the party commended President Jonathan’s “resolute and decisive tackling” of Nigeria’s security challenges which, it said, had curbed terrorism and insurgency in Nigeria, particularly in the North-East geo-political zone.

The PDP also applauded ongoing reforms and development in the country, especially those in the agricultural, aviation, transportation, and education sectors, saying that it was apparent that President Jonathan’s Agenda for National Transformation is being diligently implemented and that Nigerians are better for it.

The party commended President Jonathan’s strict adherence to the rule of law as well as his protection and defense of the constitution.
“The President is discharging his mandate to the appreciation of Nigerians that overwhelmingly voted for him in the 2011 general elections. “It is therefore in view of the above that members of the National Executive Committee of our great party do hereby pass a vote of confidence in the President, Commander-In-Chief, Dr. Goodluck Ebele Jonathan, GCFR,” the motion stated.