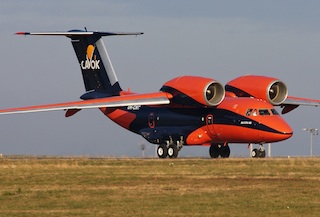 A plane owned by Cavok Air

A Kenyan aircraft grounded in Nigeria on 3 June 2013 for non-adherence to security procedures remains grounded, Nigerian aviation authorities said on Thursday, escalating a diplomatic row between both countries over the deportation of Nigerians from the East African country.

The Kenyan plane, a DC-9, had landed at the Murtala Muhammed International Airport in Lagos, southwest Nigeria, with three Nigerian deportees and 15 crew members when it was grounded for ‘security reasons’.

The aircraft with registration number, 5Y-SAX is owned by Cavoc Airline.

The Federal Airports Authority of Nigeria, FAAN, said the aircraft has been ‘detained’ since 3 June 2013 under the directive of the Ministry of Foreign Affairs.

The coordinating general manager, corporate communications, aviation parastatals, Yakubu Dati who confirmed the grounding of the aircraft, said the plane is still undergoing security screening 17 days after it was grounded and would be ‘released’ when completed.

The deported Nigerians, Dati said, are still in detention at the Ministry of Foreign Affairs under the watchful eyes of security agencies.

“On the 3rd of June at about 18:36 hours, a Kenya aircraft with registration number 5Y-SAX, owned by Cavoc Airlines arrived Nigeria with a total of 18 persons. Among them, 15 were crew members while three were passengers. The three Nigerians were said to be deportees from Kenya , but the security agencies in Lagos discovered that certain procedures were not complied with and subsequently grounded the aircraft.

“That is why the aircraft has been grounded and it is going through security routine at the moment. As soon as the grey areas are clarified the aircraft will be released according to the laws of the land. The type of aircraft is DC-9 and the deported are still under detention,” Dati said.

The announcement of the grounding of the Kenyan plane comes only five days after a Ukrainian plane was also grounded in Kano northern Nigeria, for allegedly carrying a suspicious cargo.