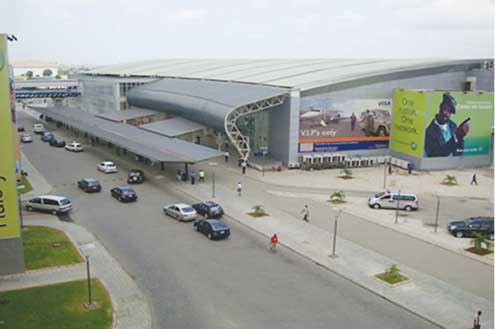 Thugs and hoodlums hired by Bi-Courtney Aviation Services Limited, managers of the Murtala Muhammed Airport Terminal 2 have stormed the Lagos airport and caused a breach of peace, Nigerian aviation authorities alleged on Saturday, But Bi-Courtney reacted angrily and debunked the allegation.

Dati said the activities of the hoodlums resulted in unnecessary traffic bottleneck on the airport access road before FAAN security officials dispersed them, restored order in the affected part of airport and removed the advertisement flex.

But Bi-Courtney reacted angrily at the allegation, saying in a statement that FAAN had vandalised its property for the second time in two weeks.

“For the second time in two weeks, officials of the Federal Airports Authority of Nigeria (FAAN) vandalised the advert billboards placed by Bi-Courtney Aviation Services Limited (BASL) on the hotel project at the Murtala Muhammed Airport (MMA2).

“Besides, the agency’s officials with about 60 hired thugs invaded the premises of MMA2, where they assaulted the workers, damaged a video camera and seized many handsets belonging to the workers. They swooped on the billboard barely 15 minutes after it was reinstalled and vandalised it before taking it away in a van,” said Steve Omolale-Ajulo, Bi-Courtney Head Corporate Communication.

FAAN removed all illegal advertisement material on billboards and structures along the internal road of the Murtala Muhammed Airport in Lagos, southwest Nigeria, two weeks ago, claiming that they infringed on its advertisement rights.

FAAN had said that dismantling of those advert materials was part of a nationwide exercise being carried out by FAAN to halt illegal advertisement on airport land.

“The Authority (FAAN) views the recent replacement of the dismantled advert material along the airport internal road by Bi-Courtney today (Saturday), as an act of provocation which must be resisted, in the overall interest of safety and security at the Murtala Muhammed Airport,” Dati said.

FAAN and Bi-Courtney have been in constant dispute over the concession agreement.

The following judgments were resolved in favour of Bi-Courtney: In 2009, the Federal High Court sitting at Abuja ordered the Federal Government of Nigeria and FAAN to hand over the General Aviation Terminal to Bi-Courtney in Suit No. FHC/ABJ/CS/50/2009 delivered on 3 March, 2009.

There have been four appeals against this judgment all resolved in favour of Bi-Courtney. The orders contained therein are yet to be obeyed by FAAN.

“It has become very clear that FAAN is more interested in violence and disobedience of court orders than in respecting the rule of law and public order. The refusal to obey these various court orders shows clearly that the rule of law is on suspension in Nigeria or FAAN is above the law,” Omolale-Ajulo, Bi-Courtney spokesperson said.
Sent from my BlackBerry wireless device from MTN