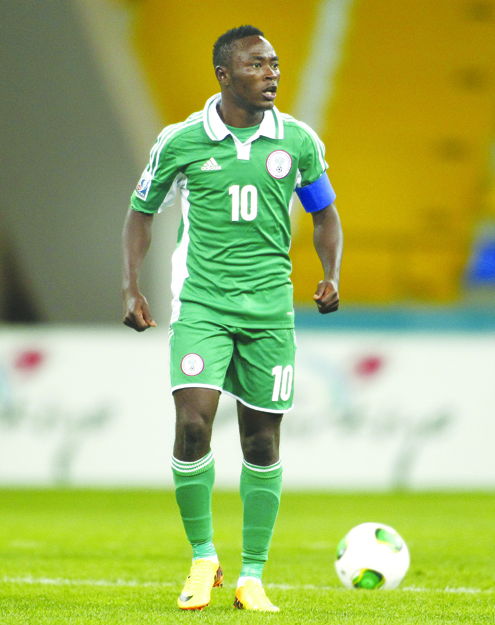 ON THE MOVE...Nigerias Abdul Ajagun moves with the ball during a group stage match between Nigeria and Portugal at the FIFA U-20 World Cup at Kadir Has Stadium in Kayseri on 21 June, 2013. AFP PHOTO

Judging by the expression on the faces of Coach John Obuh and his players as they left the Kadir Has Stadium in Kayseri  Tuesday, it looked as though they had just lost their Group B match to Cuba. Yet nothing could have been further from the truth, the Nigerians having cruised to a 3-0 win over the CONCACAF side to open their account at the FIFA U-20 World Cup Turkey 2013.

The reason for the Nigerians’ displeasure was the amount of gilt-edged chances they had spurned, an unwelcome repeat of their profligate performance against Portugal in their opening match. Altogether, the Africans have had 44 efforts on goal at Turkey 2013 and yet have managed only five goals.

One player more despondent than most about that poor return is captain Abduljeleel Ajagun, who just happens to be his side’s leading marksman with three goals and the competition’s joint-top scorer, all of which begs the question: why the dejection?

“It’s been a good tournament, but the fact is I’ve missed too many chances up to now,” the stern-faced number10 told FIFA.com. “We’ve created a lot of chances, and I’m hoping that the goals will start to come thick and fast from now on.”

While it might seem that Ajagun is being too hard on himself, the fact is he could easily be well out in front in the tournament scoring charts instead of being tied with Spain’s Jese and Bruma of Portugal.

In his side’s 3-2 defeat to the Portuguese he spurned three excellent chances, though in mitigation he was denied on each occasion by superb stops from goalkeeper Jose Sa and did score both Nigeria’s goals. Another came his way against Cuba, as did further missed chances, the clearest of them from the penalty spot.

Nigeria’s wastefulness in front of goal prompted their coach to say this before making his way to the post-match press conference: “The team passed up a lot of chances but fortunately we still have time to put things right. Goal difference is important in the group phase and we missed opportunities against Portugal too. It could be crucial at the end of the day.”

As the look on Ajagun’s face revealed, the Nigerians are not their usual happy selves at the moment, aware as they are that they could be in a far more comfortable position in the group were it not for their wayward finishing. Even so, the demanding striker still found reasons to look on the bright side.

“The most important thing is that we’re playing as a team,” he explained. “Everyone is helping each other and when someone makes a mistake we try to gee them up. I keep saying we need to reach for the top. That’s the only way we’ll score more goals.”

Ajagun is speaking not just as a captain but as someone who already has two FIFA World Cup competitions under his belt. It was in those tournaments that he set the high standards he judges himself by. A scorer of two goals as the Golden Eaglets finished runners-up at the FIFA U-17 World Cup Nigeria 2009, he was also on target at the FIFA U-20 World Cup Colombia 2011. In getting on the scoresheet against Portugal last week, he became only the 13th player to score in two consecutive U-20 world finals.

“It’s really vital to be consistent and have experience in football. That can help you in your career a lot,” said the 20-year-old, who plays for Nigerian club Dolphins. “It was a valuable experience for me to play in that tournament at home and to then go to Colombia. I can tell my team-mates about the good and bad things that happened and help them stay relaxed. Because of that I know we can only improve.”