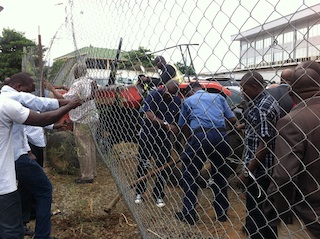 The crisis between the Federal Airports Authority of Nigeria, FAAN, and AIC Limited, escalated on Tuesday with blows being exchanged and suits being torn.

The crisis worsened on Tuesday morning after some officials of FAAN brought in earth moving equipment and pulled down the wire fence surrounding a piece of land which was concessioned to AIC Limited on 17 February 1998 for the construction of a five-star hotel and a modern shopping centre.

FAAN officials did not pass through the main entrance to the site, instead they pulled down the barbed wire fence to gain access into a land that has been in contention for 15 years.

FAAN claimed it wanted to clear the land of grasses and snakes for safety reasons and use it for massive developmental projects after it secured a favourable court ruling at the Lagos Federal High Court on 19 June 2013.

Harry Akande, businessman and politician who had secured a billion dollar financing promise from local and foreign investors to win the AIC bid in 1998 could not believe what was happening around him.

“You have now witnessed the recklessness of FAAN by yourself,” he told journalists after stones were thrown at him and press men by the Chief Security Officer at FAAN.

Akande and AIC staff came to the site after they learned that FAAN was clearing it. They re-erected the barbed wire fence which was pulled down by FAAN.

Shortly after that FAAN stormed the site and began pulling it down again. After resistance from AIC staff, FAAN brought in thugs and a free for all began.

Blows and slaps were exchanged, especially by FAAN, tearing the suit of Olu Akande, the businessman’s son, assaulting others and threatening to break the Sport Utility Vehicles belonging to Akande.

“Take the pictures where you want,” FAAN Chief security officer told journalists as he threw stones at them and Harry Akande as well as other staff.

Niyi Akande, General Manager Administration and Business Development told journalists at the site that after appealing 19 June ruling status quo should be maintained.

“Even a small boy knows that once there’s an appeal to a ruling the status quo should be maintained,” he said.

He said the company had secured a billion dollars financing promise from local and foreign investors but FAAN had frustrated the project and is planning to award the same project to a Chinese firm.

“This land they want to take away from us, they are giving it to the Chinese for the same project,” Niyi Akande said.

He said AIC had spent 14 million dollars just for the design of the hotel and shopping mall and others to secure the bid in 1998.

Akande said the development of the site began in 2000 but was frustrated by FAAN. The company approached the arbitration court and was awarded 48 million dollars in 2010 by late Justice Kayode Eso.

But FAAN refused to obey the ruling, claiming that it had the right to appeal at the Federal High Court.

The legal fireworks lasted for three years and on 19 June 2013, Justice Ibrahim Buba set aside the award of the arbitration court.

AIC moved to the Appeal Court to challenge the ruling and also filed an injunction against FAAN taking any illegal action while the matter is still in court.

But on Tuesday FAAN moved equipment to site to take over the land and the move was resisted by AIC.

FAAN spokesperson Yakubu Dati, told journalists that AIC thugs invaded the airport with dangerous weapons and were evicted because they constituted a threat to security and safety at the airport.

“The thugs, (who) were armed with dangerous weapons, are constituting a threat to security and safety at the airport because they are occupying a piece of land located very close to the tarmac of the airport,” Dati said.

He added: “The authority has put measures in place to ensure adequate security and safety at the airport to check the nefarious activities of AIC Ltd, which has resorted to self help in the protracted concession disagreement between it and FAAN.”

However, our correspondent who was at the scene saw no dangerous weapons in the possession of AIC staff or Harry Akande.

Sent from my BlackBerry wireless device from MTN