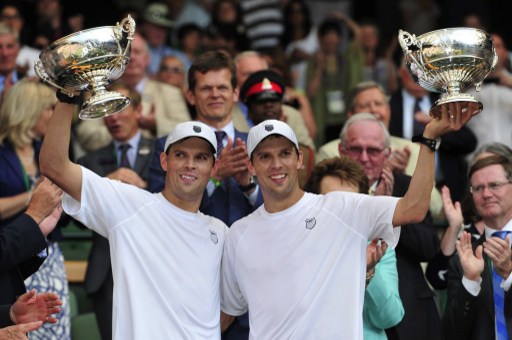 Peng and Hsieh, born four days apart in January 1986, have been friends since their junior days and won the first of their five titles together back in 2008.

Hsieh is the first Taiwanese player to win a Grand Slam major.

Their win also meant that both of the women’s titles on Saturday were won by players using double-handed strokes off both wings.

Marion Bartoli, with the same style, had clinched the singles title earlier in the day.

“This is very special because tennis is not that popular in Taiwan,” said Hsieh.

“I am very proud to have won with my good friend although I am not sure if it will have any effect on juniors in my country.”

Peng, 27, who has been friends with Hsieh since they were 13, said her uncle taught her the double-handed style when she was a child.

“I was quite small and not very strong so my uncle told me it was easier to hit the ball this way. It was tough to change it after that because you get used to it.”

The men’s double was won by American twins Bob and Mike Bryan.

They became the first men’s doubles team to hold all four Grand Slam titles in the Open era when they won Wimbledon for the third time on Saturday.

The brothers, taking part in their 25th Grand Slam final and who also won Wimbledon in 2006 and 2011, had also claimed gold at the Olympics in 2012.

They now have 15 men’s doubles titles at the Grand Slams and extended their winning streak to 24 matches.

“We’ve been working hard and taking care of our bodies. We’ve put the game in the right perspective in our life. When we lose, it’s not the end of the world,” said Bob Bryan.

“He’s married; I have a family; I have a kid. We’re just playing for fun. We’ve done it all in the sport, and now we’re just out there taking swings and not living and dying with every win and loss.”

Mike Bryan said the brothers still have plenty of ambitions, including defending their Olympic title in 2016 in Brazil.

“Probably like to hit 100 titles. I think today was 91,” said Mike when asked to set out their future plans.

“Then maybe try to finish No. 1 ten times. This year would be nine, if we did it. We got a pretty good lead. Then try to get to Rio and get another medal.”

Ken McGregor and Frank Sedgman are the only pair to have completed the calendar Grand Slam back in the pre-Open era of 1951.