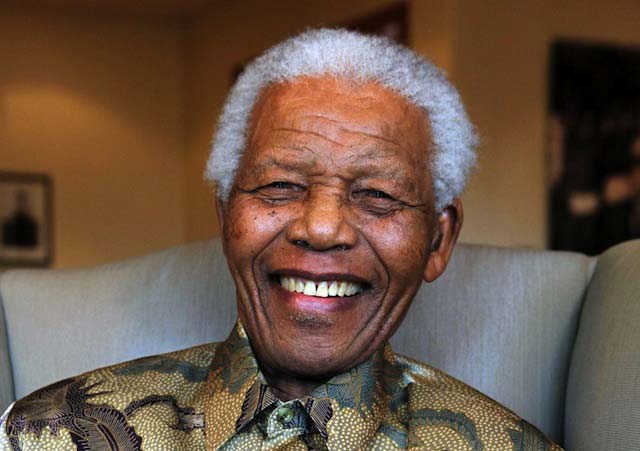 Global celebrations and charity events will mark Nelson Mandela’s 95th birthday Thursday, but the critically ill anti-apartheid hero himself may still be confined to his Pretoria hospital bed on life-support.

Volunteers will spend 67 minutes on hundreds of community upliftment projects — a minute for every year of his activism.

But his hospitalisation for a recurring lung infection and bitter infighting among his relatives have tempered the festive spirit.

The United Nations in 2010 declared the Nobel peace laureate’s birthday Mandela Day — to encourage people around the world to do just over an hour of good deeds.

Global celebrities have supported the campaign in memory of Mandela’s 67 years of political activism.

“I will also be giving my 67 minutes to make the world a better place, one small step at a time,” British business magnate Richard Branson pledged in a recorded message.

On Thursday, children in schools around South Africa will start their classes singing “Happy Birthday” to the former statesman. Celebrities have committed to painting schools, handing out clothes to impoverished kids and countless similar projects.

The inauguration of the Nelson Mandela Legacy Bridge is scheduled at the icon’s birth village, Mvezo, in the rural Eastern Cape province.

A science-specialisation high school bearing his name is also due to be opened.

On Saturday, Australian city Melbourne will hold a concert featuring local and African artists, while a music festival later this year in Norway will promote equality in schools.

He was convicted of treason in 1964 and spent the next 27 years in jail.

After his release Mandela skillfully negotiated with the apartheid minority government to end whites-only rule.

He became South Africa’s first black president after all-race elections in 1994 and led reconciliation in the deeply divided country.

“Never before in history was one human being so universally acknowledged in his lifetime as the embodiment of magnanimity and reconciliation as Nelson Mandela,” archbishop emeritus Desmond Tutu, himself a Nobel peace laureate, said.

Former US secretary of state Hillary Clinton said her family had been inspired by “a man who personifies the best of humanity.

“He is proof that even the most intractable problems are surmountable, that division can be overcome with dignity and forgiveness can triumph over fear,” said Clinton.

But the ailing icon is bound to spend his birthday in the hospital where he has been for the past six weeks, breathing with the help of a machine.

Almost a month ago, the presidency announced that his condition had worsened. But it has denied he is in a “vegetative state”, as his family claimed in court documents dated June 26.

His health has recently improved, according to official statements and comments from family and friends.

His successor as president, Thabo Mbeki, even suggested he might be discharged from hospital in time to spend his birthday at home.

As Nelson Mandela fights for his life, members of his family are fighting amongst themselves.

It recently emerged that grandson Mandla Mandela had moved three graves of Mandela’s children, from the icon’s childhood village of Qunu to his own Mvezo village, without consent of the rest of the family.

Fifteen relatives, including Nelson Mandela’s wife Graca and three daughters, accused Mandla of trying to force Mandela’s eventual burial to be in Mvezo.

Mandela has previously expressed the wish to be buried with his family in Qunu.

The relatives won a court battle against Mandla, and the graves were forcibly returned.

Mandla subsequently attacked his relatives in a televised press conference, accusing his aunt, Mandela’s oldest daughter Makawize, of sowing divisions in the most famous family of South Africa.

Tutu finally had to appeal to the family not to besmirch Mandela’s name.

But the messy public dispute showed how difficult it is for even Mandela’s own family to live up to his principles of humility and unity.