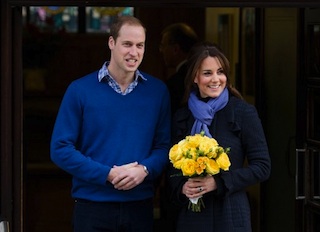 LONDON, July 22, 2013 (AFP) – Prince William’s wife Kate gave birth to a baby boy on Monday, providing Britain’s royal family with a future king in an event that had been anticipated around the world, Kensington palace said.

Crowds cheered and rushed towards the gates of Buckingham Palace as it was announced that the Duchess of Cambridge had produced a male heir weighing 8lbs 6oz (3.8 kilos).

The baby will be third in line to the throne and in the direct line of succession after head of state Queen Elizabeth II’s eldest son and heir Prince Charles, and then his eldest son William.

“Her Royal Highness The Duchess of Cambridge was safely delivered of a son at 4:24 pm (1524 GMT),” Kensington Palace said in a statement just over four hours afterwards.

“The baby weighs 8lbs 6oz. The Duke of Cambridge was present for the birth.”

The boy’s name was not revealed, but he will be known as Prince of Cambridge.

The former Kate Middleton was admitted to the private Lindo Wing of St. Mary’s Hospital, Paddington, central London, at around 6:00 am in the midst of a summer thunderstorm.

The birth was later officially announced to great cheers on a golden easel placed in the forecourt of Buckingham Palace.

US President Barack Obama’s spokesman had earlier said that he and the first family were “waiting with anticipation” for the birth and “wish the family and all of Great Britain well on this pending momentous occasion.”

William, at his wife’s bedside, has been on annual leave and will take two weeks’ paternity leave from his military job as a Royal Air Force search and rescue pilot.

Both mother and son were “doing well” and will remain in hospital overnight while the queen was “delighted with the news”, according to the palace.

The birth came later than widely expected, adding to the sense of anticipation that has built up ever since William, whose mother Diana died in a Paris car crash in 1997, and the former Kate Middleton married with huge fanfare in April 2011.

Bookmakers had largely backed a girl baby, after Kate had said they did not know its sex.

The fact that it is a boy relieves the need to rush through new succession laws across the 16 Commonwealth realms, which would mean that a girl could no longer be overtaken by any future younger brothers.

The royal couple used a back entrance to the hospital when they arrived at 6:00 am (0500 GMT), missing the ranks of international media who have camped outside the hospital for three weeks.

The prince was born in the same hospital wing and media from across the globe are hoping for a repeat of the scene in 1982 when Charles and his first wife Diana brought out the baby to show him off to the world.

Royal fanatics gathering outside the hospital also took their excitement to a new level.

“I’m so excited. Like in a washing machine. Never been so high!” said John Loughrey, who has slept outside the hospital for seven nights, wrapped in a British flag.

The new arrival is Queen Elizabeth’s third great-grandchild, and a first grandchild for Charles.

It ensures that there are three generations of heirs to the crown of the United Kingdom of England, Wales, Scotland and Northern Ireland — a nuclear-armed UN Security Council permanent member and the world’s sixth biggest economy.

The queen was seen arriving back at Buckingham Palace from Windsor Castle, just outside the capital, in mid-afternoon but other royals went about their usual business.

Charles, the current heir, was visiting York in northern England, where members of the public shouted “Congratulations!”.

Smiling, he replied: “Do you know something I don’t?”

Charles, who turns 65 in November, joked: “I’m very grateful indeed for the kind wishes for my rather slowly-approaching grandfatherhood.”

Prime Minister David Cameron sent his best wishes to the couple and the “whole country is excited.”

The pregnancy was announced in December when Kate was admitted to hospital with severe morning sickness.

The duchess is being tended by a top medical team led by the queen’s gynaecologist Alan Farthing and his predecessor Marcus Setchell.

On the pavement opposite the hospital entrance, around 30 presenters lined up in a row delivering live broadcasts and clips, with photographers and journalists filling out the scene.

There has been a betting frenzy on the name of the royal newborn with bookmakers favouring a George and James for the top boys’ names.