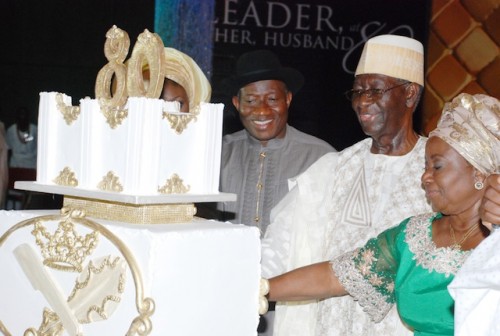 One of Nigeria’s leading politicians, Chief Tony Anenih marked his 80th birthday today, attracting the shakers and movers of the country to the two-level event in Abuja.

There were a thanksgiving service, with prayers offered by Archbishop of Kafanchan, Joseph Bagobiri and a reception party afterwards. The sermon at the thanksgiving was delivered by The Archbishop of Abuja, Cardinal John Onaiyekan. He urged Nigeria’s political leaders to always fear God and promote the people’s wellbeing.

He urged the politicians to always see political power and wealth as temporal, adding, that they should, therefore, use them for the benefit of the masses.

Onaiyekan said that all human beings, irrespective of their position, status, wealth and affluence must see themselves as mere mortals.

President Goodluck Jonathan and his wife, Dame Patience were there to celebrate with the man, reputed with the political magician touch, in his heydays. Former leaders, Olusegun Obasanjo, Ibrahim Babangida, AbdulSalami Abubakar also attended. So was Governor Adams Oshiomhole, the political nemesis of Anenih in his home state of Edo.

Business mogul and Nigeria’s richest man, Aliko Dangote also attended. And so did the duo of General Theophilus Danjuma and his wife, Senator Daisy Danjuma.

Here are some photographic memories of the event

A birthday card from another octogenarian, ex-Vice President Alex Ekwueme, on behalf of PDP Board of Trustees. 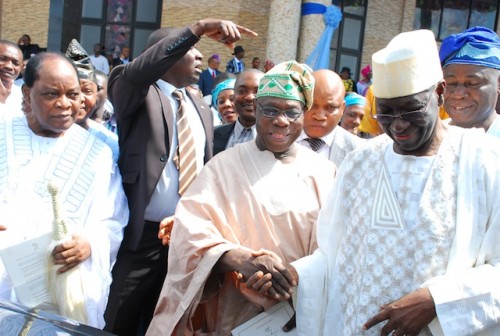 Obasanjo after blessing Zimbabwe’s rigged poll, rushed down to felicitate with his ‘Leader’. Photo State House 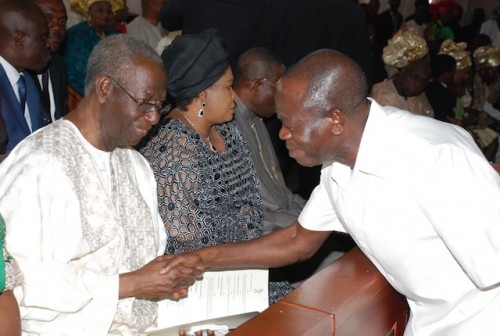 Adams Oshiomhole, governor of Edo State also came to pay some respects—well to his elder 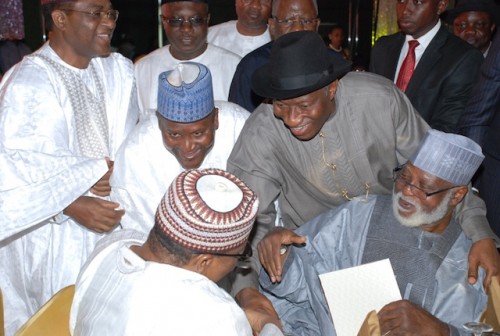 Happy Birthday from TY Danjuma and his wife, Senator Daisy 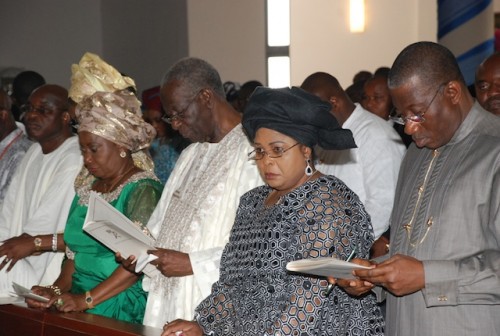 Anenih is at present, chairman of the PDP Board of Trustees, taking over the position from former president Olusegun Obasanjo.

Known as ‘Mr Fix-It’ and more fondly as ‘The Leader’, Anthony Akhakon Anenih was born in Uzenema-Arue in Uromi on 4 August 1933.

In 1951 he joined the Nigeria police force in Benin City. Working at home, he obtained secondary school qualifications. He attended the Police College in Ikeja, and was selected for further training in the Bramshill Police College, Basingstoke, England in 1966 and the International Police Academy, Washington DC in 1970.

He served as a police orderly to the first Governor General of Nigeria, Dr. Nnamdi Azikiwe and worked as an instructor in various police colleges and the Administrative Staff College(ASCON) in Badagry. Anenih retired from the police force, just in time to take part in the politics of the Second Republic in 1978/79.

He has been a politician ever since.