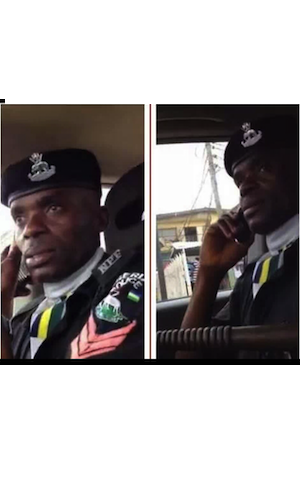 Chris Omoleze: The faces of the corrupt policeman

The Nigerian Police has dismissed the sergeant caught on video demanding a bribe of N25,000 from a motorist arrested for traffic offence.

The sergeant, now identified as Chris Omeleze was dismissed upon the conclusion of an orderly room trial yesterday

Omoleze with Force number 192954 was attached to the Lagos State Motor Traffic Division,MTD

When contacted on phone, spokesman for the Lagos State Police Command, Ngozi Braid, confirmed the dismissal. She simply stated, “ Yes, he has been dismissed”, reported Vanguard online.

The dismissed Sergeant arrested a motorist who was returning from the airport, for contravening traffic rules. He entered the vehicle, threatening to take the motorist who was with a female passenger to the station.

However along the line, he reportedly demanded for the sum of N25,000 from the motorist to allow him (motorist) go. But the motorist offered the sum of N2000, pleading that he had only N500 on him, an offer the policeman bluntly refused. But unknown to him, the negotiation was being recorded on video.

Later that day, the video clip went viral on social media, prompting the Inspector-General of Police to direct the Lagos State Police Command to fish out the policeman and carry out an orderly room trial on him.

The video clip as gathered, was used during the trial where the Sergeant was said to have been dumb founded and appealed to be given a second chance.

Here are the video and the transcript of the bribe negotiation:

Policeman: Once we enter this compound now(police station), I no go follow you talk

Policeman: OK. Talk better thing now, make you go your way, make you go your Osborne
Motorist: (Protests again) I don’t have more than N2,000
Policeman: Ok (sighed). Oh.. (quiet)
Motorist: If you want to help me, must I pay N25k?
Policeman: I know sir, I know you cannot raise N25,000. But talk something reasonable
Motorist: (Female passenger) I told you I just got my ticket now. You want me to show you. My ticket is in the car.
Policeman: Wait now… What you are saying is very far… Add something reasonable to that. Make you go your way. I know there is no how you can raise N25k; a guy like you.
Motorist: Oga, a man like me… oga
Policeman: And moreover, I am not working alone.Look, if you enter this compound (police station), you will pay bigger money.
Motorist: You know I won’t stand on that ground and risk saying bigger amount when I don’t have. I don’t have…
Policeman: I am not working alone
Motorist: I don’t live here. I came here to collect something. I have N500 on me. If I cannot at least… I’m going to Ajah. I’m coming back to Airport tomorrow. How do you want me to do it?
Motorist (Female) I’ve told you .. should I show you my ticket?
Policeman: Wait… No be $50, $20 and other dollars dey with you?
Motorist: (Female): I have told you I’m paying for excess luggage. That was why I offered you…
Policeman: All that $50 dollars – you want to use for excess luggage… you dey speak grammar; by the time when speak (sic) no dey for two of us, you go see my own. Add something to that money.
Motorist: I don’ have
Police: You don’t have ….(sighed) pause…
Motorist: So you cannot help me because I cannot put small money to it….. to that N2,000 (silence for some moments)
Policeman: I have related to you like my own young brother, like friend…
Motorist: Have I not spoken to you like a man, to tell you what I have?
Policeman: if it is possible from that side.. you think I will still be inside here? (the car)
Motorist: You think I will waste my time here if I have more money?
Policeman?: I’m not working alone, if I am, even if it is N1,000 I will collect from you and go.
(Policeman picks his mobile phone and calls a colleague named Wasiu and reports that the jeep car that he arrested is not ready to deal; that he should tell Oga to ‘book it’ “He told me N2,000”, he reported to the said Wasiu.