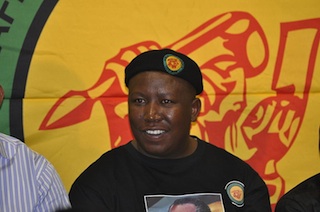 Julius Sello Malema,leader of South Africa’s political movement, the Economic Freedom Fighters will be visiting Nigeria’s preacher, TB Joshua in the Synagogue of All Nations in Lagos, Nigeria.

The visit will begin today and end on 15 August.

News about the visit was disclosed on the Facebook page of the EFF.

“Commander in Chief, Fighter Julius Malema will lead a delegation from the Central Command Team of the EFF in this spiritual visit to meet and create friendship with this son of Africa and his congregation: and ask for blessings for the journey ahead”, said the statement.

EFF said its leader, in meeting Joshua for blessings will be following the footsteps of Winnie Madikizela-Mandela, who visited Joshua’s church in 2011.

Joshua’s Synagogue has been attracting a throng of VIPs from across Africa.

After a series of suspensions from the party for hate speeches and for sowing racial discord in the party, he was expelled in 2012.

In September 2012 he was charged with fraud and money laundering.
He appeared before the Polokwane Magistrates Court in November 2012 to face these charges, plus an additional charge of racketeering.

Malema founded the EFF in July this year. He is EFF’s president.