Delta State assemblymen in US for leadership course 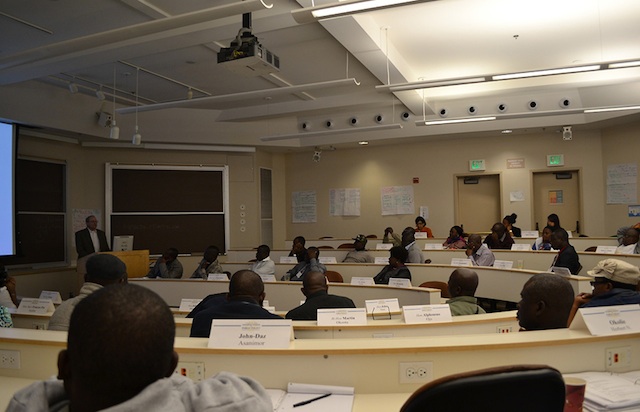 After laughing and chatting in close-knit circles, it’s finally time for a group of Nigerian state legislators in the living room of UC Berkeley’s Goldman School of Public Policy to hear the day’s lecture, aimed at bringing them one step closer to implementing better public policies in their state.

The group of 40 legislators from the Delta State House of Assembly in Nigeria arrived in Berkeley on July 29 to take part in a newly designed two-week executive leadership program focusing on governance and policy development in areas such as housing, higher education and sustainable energy. They will be returning for the next two summers to participate in additional two-week training programs.

Victor Ochei, speaker of Nigeria’s Delta State Legislature, said that when the House Assembly was originally looking at educational programs abroad, they were choosing between various prestigious schools, including UC Berkeley.

“We thought Harvard was the best, actually, but Goldman was the top-rated school,” Ochei said. “Here in Berkeley, it’s different because the style is more open and more practical. For every time there’s a lecture, there is a field trip. ”

Staff members at the Goldman school said they view the program as an exciting opportunity not only to teach theoretical public policy frameworks but also to see how those theories are put into practice by active world leaders. The school also partners with the Jiangsu province in China, Kochi University of Technology in Japan and the Civil Service Bureau of the Hong Kong special administrative region to create similar programs.

“We want to implement international policy and understand how other countries are thinking in order to be able to work with them,” said Sudha Shetty, assistant dean for global alliances at the school.

Different issues are addressed each day during the two-week program, providing a comprehensive education in each area of public policy the leaders wish to reform.

Wednesday’s itinerary included a discussion with Henry Brady, dean of the public policy school, concerning the dynamics of higher education and what it does for society. The discussion was followed by a group field trip to Sacramento to see California legislators in action.

On another day, legislators worked on developing innovative ways to engage Nigerian youth in issues like job access and education, which, according to the Honorable Barr Princess Pat Ajudua, has posed a significant challenge.

“The youth are restless — restless from unemployment and lack of education,” Ajudua said. “When youth get out of school and find themselves without a job, they turn to all kinds of criminal things to get money to leave their parents and get married and lead a good life.”

Because of the program, Ajudua believes that the Assembly has already learned strategies to confront the issue, such as instating more facilities provided for youth to go to school, financial grounds for students to get an education they otherwise could not afford and initiating new training programs for teachers.

Despite the seriousness of the political problems the program aimed to tackle, the atmosphere in the lecture hall was both academically rigorous and social. Assembly members shared many laughs and side conversations between PowerPoint slides on global governance.

“So far, the program’s been fantastic,” Ochei said.

.Culled from The Daily Californian Newshttp://www.dailycal.org/2013/08/07/nigerian-leaders-visit-goldman-school-of-public-policy-for-educational-program/