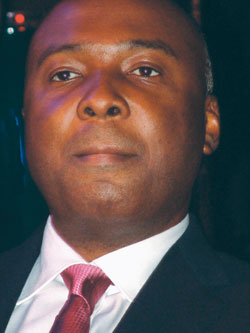 Nigeria’s Economic and Financial Crimes Commission, EFCC on Monday in Abuja began the questioning of former Governor of the central state of Kwara, Bukola Saraki on fraud allegations related to his tenure as the chief executive of Kwara State.

P.M. NEWS gathered that Saraki, now a Senator reported to the Abuja headquarters of the anti-graft agency on Monday morning.

The office of the former Governor had earlier confirmed that it received an invitation from EFCC while the Senator was away on lesser Hajj.

Findings at the commission indicated that the embattled senator is being grilled by anti-graft operatives over an ongoing cat and mouse race the senator has been having with the authorities in relation to an alleged forgery and stealing of the sum of N21 billion belonging to Joy Petroleum Limited.

The senator recently had to seek refuge at a Federal High Court in Abuja following his refusal to honour an invitation issued him by the Nigeria Police which invited him to assist in the investigation of the alleged crime. The Police had secured an order of a Federal High Court in Lagos which declared Saraki wanted. The police also issued a warrant for his arrest.

Justice Gladys Olotu of the Federal High Court in Abuja , while vacating the Lagos court’s for the arrest of the senator, noted that the steps taken by the Police then had over-reached the suit instituted by the senator which was intended to question his invitation by the Police without any specific allegation made against him.

The Police had argued that the steps it took in inviting the senator was based on intelligence reports which indicated that Bukola Saraki was about to run out of the country in a similar manner as a former governor who ran away from the country to evade justice only to end up in UK where he was tried and sentenced to thirteen years imprisonment.

Despite the court’s ruling over the matter, Bukola and his wife later reported to the Headquarters of the Nigeria Police where they were both grilled over the alleged multi billion Naira forgery scam and they made statements to the Police.

Monday’s grilling of Saraki by the operatives of the EFCC at the commission’s headquarters was said to be related to new findings unearthed in the investigation of the alleged crime. These new findings however, are yet to be revealed at the time of filing this report.

A source within the commission informed P.M. News that the senator is undergoing some “question and answer” sessions at the commission over some developments made in the investigation of the N21 billion forgery at Joy Petroleum Limited in which the senator and his family have substantial interest.

“My brother, I’ve left the office right now, but as at the time I left the office, the man was still there. He’s likely going to spend the night there going by the way the interrogation is going,” said the official who spoke to P.M. News in confidence.