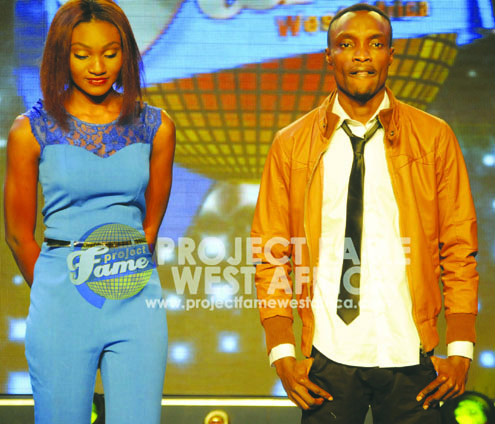 Gbemisola and Henry have been evicted from the on-going MTN Project Fame West Africa (season 6), while Nancy, who participated from the Wild Card contest, has been promoted to the academy.

Before announcing the Wild Card winner, the 14 contestants in the academy stepped out to perform a medley of some Nigerian hits in honour of the legends who rocked the music scene in their lifetime. They include Nico Mbarga, Christy Essien Igbokwe, Sunny Okosuns and Fatai Rolling Dollar. This performance received a loud ovation from the audience as they swayed from one song to the other effortlessly.

After choosing Nancy as the Wild Card contest winner, the contestants on probation the previous week mounted the stage one after the other to repeat the songs that landed them on probation.

During the eviction show, Olawale was saved by the viewers, Blessing found favour in the sight of the faculty and Johnny got most of the contestants not on probation on his side. This led to the elimination of Gbemisola and Henry.

Meanwhile, Sunday was another night of beautiful tunes as the surviving contestants performed R&B hits.

Opening the stage was Immaculate, who made a flawless rendition of My Funny Valentine by Chaka Khan. Other performances include Blessing -Next To Me by Emelie Sande, Olawale -Tell Me What You Want Me To Do by Tevin Campbell, Nancy -Overjoyed by Stevie Wonder,

Margaret -Smooth Operator by Sade Adu, Ayoka -Have You Ever by Brandy, Jimoh -Show Me The Meaning Of Being Lonely by Backstreet Boyz, Omolayo -Just The Way You Are by Barry White, Johnny -Gotta Get You Home With Me Tonight by Eugene Wilde, Niniola -Miss You Like Crazy by Natalie Cole, David -Superstar by Luther Vandross, Simon -Wonderful Tonight by Eric Clapton and Roland – On And On by Steven Bishop.

After the performances, Ayoka, Jimoh, Johnny and Nini were placed on probation for flaws in their performances. According to Mr. Olumide Akinlabi, the Head, Media & Publicity of Ultima Limited, the producers of Project Fame, “the competition is getting tougher by the day, and we have put certain measures in place to ensure that it remains the best in the whole of West Africa.”