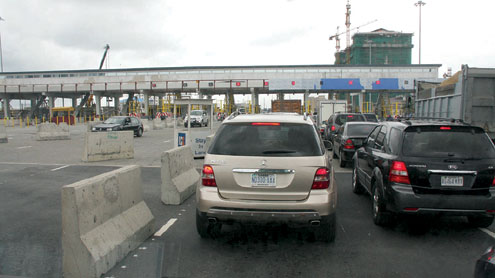 The Lagos State Government, in western Nigeria, said it has neither terminated nor cancelled the Concession Agreement it entered into with the Lekki Concession Company Limited (LCC) to reconstruct and expand the 49.36 km Eti-Osa Lekki-Epe Expressway.

Rather, the government said it is engaged in buying back the rights pertaining to the concession ahead of the 30-year period stipulated in the Design, Build, Operate and Transfer (DBOT) Concession Agreement. This is to be achieved by purchasing all the shares in LCC.

According to a joint statement by the commissioner for finance, Ayo Gbeleyi and the attorney general of the state, Ade Ipaye, the government came to this decision to buy back the rights in the light of several developments clearly not envisaged in the 2006 Concession Agreement, which became effective in 2008.

The two commissioners listed the developments as follows:
· The project, given its pioneering nature, had some underlying assumptions and market indicators under which the transaction was concluded which have since drastically changed in a manner that it can no longer be sustained in its current form. Such include the devaluation of the Naira and costs of construction.

· The LCC, which is the special purpose vehicle representing the investors, formally brought it to the attention of the State Government that given the rapid rise in interest rates on local loans, and other cost parameters, it is compelled to raise tolls currently being charged at Toll Plaza One from N120.00 to N144.00 per Car.

· The Concessionaire also brought it to the attention of the State Government, that as provided for under the agreement, tolling would have to commence at Toll Plaza Two.

· In addition, the Concessionaire indicated that unless it realised more income from increased rates at Toll Plaza One and commence tolling at the same rate per Car at Toll Plaza Two, it would not be able to meet its commitments to investors in the project and continue to fund completion of the remaining sections of the road.
· Furthermore, the LCC stated that Toll Plaza Three, as contained in the Agreement, must be built and tolls collected for the continued viability of the project.

The statement said that under such circumstances, “the Lagos State Government felt obliged to buy out the interests of the Concessionaire in advance of the hand-over date of 2038 under a mutual settlement option also expressly provided for in the Concession Agreement. This is after due consultation with all major stakeholders including the Lagos State House of Assembly based on various feedback and agitation made to the Government.”

“Contrary to the misleading reports by some sections of the media on Wednesday, August 27, 2013 from the State House of Assembly’s consideration and approval of the 2013 Supplementary Budget, the buy-back is not and does not amount to a “termination” or “cancellation” of the concession of Eti-Osa, Lekki-Epe Expressway,” the statement by the two commissioners said.

“The significance of the buy-back, for which the State Government deserves commendation, is that it allows the Government to take full control over the determination of the toll rates in order to continue to make it affordable for road users. The LCC shall therefore continue to operate as a fully commercial entity for the benefit of taxpayers and the larger society.

“More importantly, it would also preserve the ability of the Government to complete and deliver the infrastructure by direct budget funding, which was also one of the reasons for the presentation of the Year 2013 Budget Re-Ordering to the State House of Assembly,” the statement added.