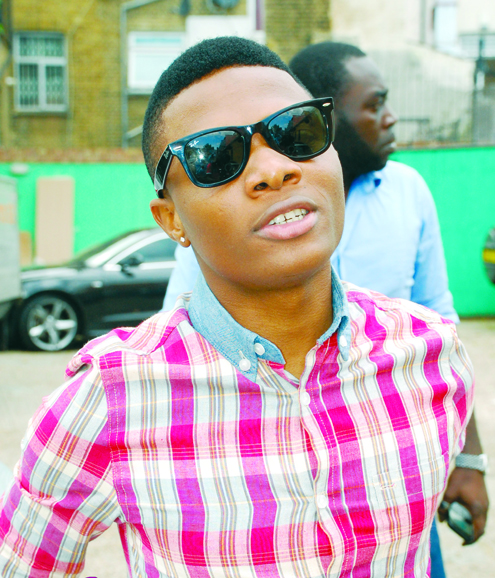 Ayodeji Balogun famously known as Wizkid hit stardom about two years ago after he was groomed by RnB star, Banky W, and subsequently signed on to the star’s label, Empire Mates Entertainment. His debut album shot him to super highway with mega shows and gigs coming his way. But after the young star joined the club of the rich and famous, he began to exhibit traits of waywardness in his lifestyle.

Balancing his new-found fame and keeping a grip on reality is becoming too difficult for Wizkid. He first showed his negative side through a direct attack on some journalists on Twitter last year August in a statement also believed to be targeted at GOOD Music star, D’Banj in the heat of Mo’Hits Records split.

Even after that, the young star continued to spiral out of control when he went on Twitter on 1 February to announce his displeasure with his label.

Wizkid tweeted: “Moving on to start all over again!…Fuck it!…Don’t take loyalty for stupidity..don’t!” Though he didn’t explain the reason for his outburst then, not many fans thought the artist was just fooling around then.

While many fans were yet to get over the reports of Wizkid throwing a bottle at a guy in a bar for “not behaving properly”, last week, he showed the other side of him again when he lashed out at one of his fans on twitter for attempting to correct his bad English.

Wizkid had posted a photograph on his Instagram page and noted that he was supposed to perform at a wedding but had erroneously typed ‘About to perform at this wedding with an hangover! Jah Guide!’.

This led to a particular fan with Twitterhandle @spruzman to send a reply: ‘Correct urself man… see d reason why you should go back to school. Lol’

But the fan’s advice didn’t go down well with Wizkid. And his harsh response that “Broke people always think they have an opinion” to the fan on his Instagram page also elicited more retaliatory tweets from angry fans.

The incident has now resulted in a pile of insults on the singer who some described as ‘proud and spoilt brat’ even though some of his ardent fans have solidly stood behind him.

Some celebs are fun to rag on because they are so ridiculous that you can’t help but love them. Then there are others who are so vapid they just suck the life out of you and it pains you that they are probably making more in a year than you will in your entire lifetime. That is that category where Nollywood actress and wannabe crooner Tonto Dikeh belongs. She is a darling to controversies.

In June, Tonto had posted photographs of a wrap of hemp and some of the weed formed into the letters, “Happy birthday POKO.”

She also posted a photograph of herself and added the inscription: “Mi smoke ganja mi smoke weed while my hatez smoke ma gossip.” The close-up picture depicted Tonto in a high state.

Tonto took her bizarre behaviour to a rather dangerous state the following week in June at the O2 Arena in London during Iyanya’s Kukere UK Concert. The actress was said to have got so drunk, staggered and fell several times on stage.

The concert, which she was expected to co-host alongside comedian Eddie Kadi, ran into a hitch when Tonto kept screaming and staggering, telling the crowd how big she is, about her armpit which she said was unshaved and other meaningless chatter until she eventually fell right there on stage. As if that was not enough, as she was getting back on her feet, her boobs popped out before she quickly got hold of herself. And the next minute the MC had to escort her off stage when the crowd booed her.

To some of her critics, she is a product of more hype than talent. She has neither starred in any movie that stands out nor has she won or got nomination in any serious award. Also, her recourse to playing music has turned out to be a major disaster, which was only salvaged when she did a collaboration with another controversial singer, Terry G.

This pseudo-celebrity cannot just be ignored. It is hard these days not to feel sorry for this lady, in spite of her famous and well-documented infamous antics. She is a usual suspect when it comes to controversies and waywardness. Her whole career is built around controversies.

The boobs-flaunting actress and singer always has a punch to land on her fans’ faces and the media world. She has decided to live and breathe sexuality, and has in fact found it difficult to present herself in a conscientious manner.

Her obvious unique selling point is her super-sized natural endowment, which she displays all the time and this has fortuitously become her passport to stardom. She started off as a go-go dancer in Fuji music star, Abass Obesere’s music videos. After a few display, she started getting a few roles in the movie world where she mainly flaunts her massive boobs that almost pop out of her clothes.

In January, she was thought to be going nuts when she posted a near nude picture of herself as her new Blackberry Display Picture.

Some weeks ago, a video went viral of Eedris Abdulkareem and Cossy  getting freaky as they did ‘dry humping’ on stage during a fashion show that took place in Yenagoa, Bayelsa State.

This is not your typical A-list celebrity, but this pretty Yoruba actress has an iconoclastic attitude that many find not worthy of being proud of. Her private life, especially as it concerns romance.

Liz has admitted to be dating several men and even had an introduction ceremony with one of them. But some months back, the rumour of her pregnancy filtered out with names of some popular socialites including road transport chieftain MC Oluomo and UK based-businessman Akeem Sodiq featuring prominently.

“The father of my child is not anyone’s problem. People should leave me alone…Why are they after the father of my baby? I have not gone to anybody to beg for the child’s upkeep so what is their business?” she retorted as she slammed those who sought to know the father of her baby.

Recently, a photograph of the actress surfaced with her holding a séx toy.

Many have asked if fast rising pop artiste, Ashimi  Ibrahim Olawale, better known as Brymo, is only craving for attention with stories swirling around his exit plan from his label, Chocolate City. But whatever assumption it may be, singer and hook master, Brymo has lately exhibited certain unbecoming behaviour which became a source of worry to his label: an open advertisement of marijuana.

This act by Brymo was said to have cost the company some gigs with clients complaining of the artiste’s shameful use of the weed.

Brymo was asked by the label to remove the tweet with the picture but he refused. Rather, he went to same Twitter to announce his exit from Chocolate City.

If one assumes that Davido, son of a Nigerian billionaire, is acting a spoilt brat, it may be true. This is because of his past and recent actions which he unabashedly posted on social media.

Last year, in a country where millions of his fans struggle to make a living, Davido posted a Zenith Bank pay cheque of N10 million on Twitter and called it a change.

Although he later apologized after the heat became too much for him to bear over such unnecessary show-off, he repeated the action again some weeks back with raw bundles of naira posted on Twitter.

Davido has also had to contend with lots of sexually related issues around his person. He was sometime involved in a ‘tweet-scandal’ involving a young girl called Sonia. The girl had posted several obscene pictures of herself and the young singer on the bed while Davido was asleep and half naked.