Motorcyclist on the rampage in Ikorodu again 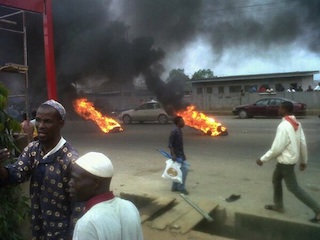 Damilare Okunola
Motorcyclists, popularly called ‘okada riders’ ensured that motorists and residents of Sabo area of Ikorodu, Lagos, South western Nigeria, had a terrible time moving from one place to another as they embarked on yet another protest against the Policeman who shot and killed their colleague.
According to witnesses, the fracas began when the motorcyclists went to Sabo and burnt tyres to prevent movement of motorists and other road users.

The policemen attached to Shagamu Road Police Division could do little to bring the situation under control as their men had to scurry for safety when the irate motorcyclists started causing problems.

It took the intervention of members of the Vigilante Group of Ikorodu, VGI, popularly known around the area as ‘Onyabo’ to ensure sanity was restored to the ever-busy road.

Speaking with P.M. NEWS at the scene of the incident, the proprietor of the vigilante group, Chief Kamorudeen Bombata, said that he was very unhappy with the recent turn of events as the motorcyclists had been asked to allow the law take its due course.
He further noted that the Policemen did not try too hard to stop the okada riders because it may end up in a similar fashion as the recent killing of one of them.

“I was at Imota for their Oro Day celebration when I received a call that motorcyclists were on rampage again at Sabo. I had to take permission from the paramount ruler to salvage the situation since I learnt that policemen did no’t want to get too involved.

“I’m not happy with this recent development because the okada riders and their leaders have been called to order after the killing of one of them. We had to wade in because we work with the king and we are not afraid of dealing with any criminal” he offered.

The Chairman of the okada riders in the area, Kayode Jimoh, however refused to take responsibility for the recent attack on policemen as he claimed that the act was perpetrated by his counterparts from Ikorodu North LGA.

“I was in the house when the DPO of Shagamu Road Police Division called to inform me that my people had started making trouble again but I denied it because all our boys have been working here at Ojubodean Ladega and its environs.

“The fire was set up by boys from the other side, Ikorodu North, it has nothing to do with our boys here, whatsoever” said the man popularly called Jendor.
Efforts to speak with the District Police Officer, DPO of Shagamu Road Police Division, SP Bernard Edia Gbonyan, proved futile as our correspondent was denied access to him in the heat of the incident.
The incident crippled activities in the area as residents, market men and women, motorists went into hiding for fear of being hit by stray bullets if it turns into an awry situation.