The many dramatic scenes at PDP convention 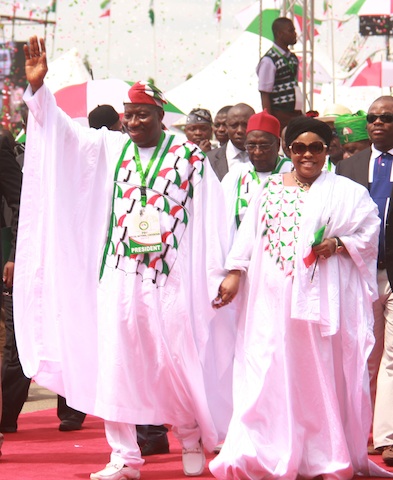 The Peoples Democratic Party, PDP convention held on Saturday to elect candidates into 17 vacant positions in the National Working Committee, NWC of the party was marked by intrigues and drama.

The first major drama was at the Anambra State pavilion where there was a re-echo of the yet to be settled controversies over who is the authentic flag bearer of PDP in the 16, November gubernatorial election.

Delegates and journalists who arrived early at the Eagle Square, Abuja venue of the convention watched helplessly as supporters of the two claimants to the PDP gubernatorial ticket, Senator Andy Uba and Tony Nwoye, on Saturday exchanged fisticuffs in their stand.

It was gathered that trouble began when supporters of Nwoye who has been endorsed as the authentic candidate of PDP in the Anambra election tried to force out Chris, the younger of the other claimant to the ticket from his seat and in the stand.

P.M. NEWS gathered that Nwoye supporters, making reference to last Thursday’s suspension of Uba brothers by the national leadership of PDP had insisted that Chris was not qualified to sit at the stand.

Chris supporters however resisted attempt to drag their man away, an action that led to free exchange of fist cuffs and resulted in rowdiness that led to quiet exit of Princess Stella Oduah, the Minister of Aviation from the stand.

Olisah Metuh, former spokesman of PDP also intervened as bodyguards shielded Chris Ubah from the fray even as supporters of Nwoye continue to hail him.

The drama lasted for about 20 minutes before some men of the Nigeria Police Force deployed at the venue were able to put an end to the crisis.

Andy however has not arrived at the venue at the time of the fracas.

When he later arrived, the factional gubernatorial candidate sat beside his brother and three seats away from Nwoye, his rival. Andy later joined Nwoye to cut the convention cake in spite of the earlier skirmishes.

Nikky Nwabueze, an aspirant for the position of National Women Leader, gave journalists inkling into the intrigues that characterized the selection and choice of candidates when he revealed that despite being screened yesterday, some people from the presidency had told them that Kema Chikwe is going to be returned for the position.

Except for the red cap wearing supporters of Governor Musa Kwankwaso who were shouting in Hausa ‘mun chanja,’ (a call for change) there was no indication that the Kano State Governor and Sule Lamido, his Jigawa State counterpart will in less than three hours be part of a major implosion in PDP.

The two governors, alongside former vice president Atiku Abubakar had gone round the pavilions waving at delegates immediately they arrived at the venue of the Convention.

Indeed, the two governors alongside the governors of Niger and Sokoto, also went to the Presidential pavilion where they paid homage to President Jonathan.

Many party members interpreted this to mean an end to the cold war between the Governors and the presidency.

Indeed, Bisi Olatilo, the compeer for the occasion had, with a kind of subdued excitement, remarked that: “If Lamido is here, who else is not here?”

After the homage to President Jonathan, all the four governors moved to Jigawa pavilion and sat there for some time to the admiration of their supporters who were milling around. If the plot to leave the convention ground for the later business of ‘PDP 2’was not hatched at Jigawa pavilion, it was perfected there!

But the Governors, led by ex Vice President Atiku later stormed out of Eagle Square and announced the formation of a faction of PDP later.

Former Senate President Ken Nnamani stepped in to announce the names of delegates eligible to contest in the elections and in the process confirmed the fear that a lot of contestants who lacked the backing of ‘powers that be’ in PDP have been screened out.