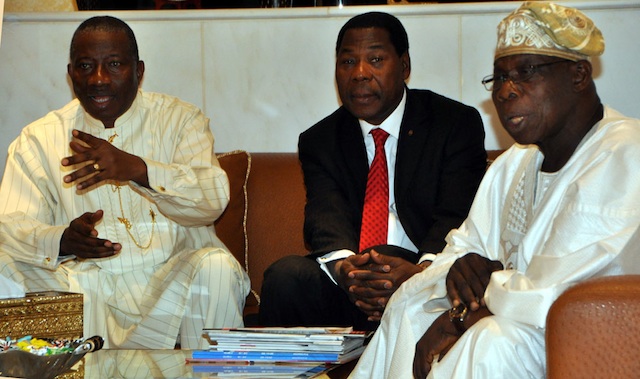 Former Nigerian President Olusegun Obasanjo and the former Chairman of the Board of Trustees,BoT of Peoples Democratic Party(PDP) has called on all disgruntled members of the party to maintain calm as a major schism tore the party apart.

The appeal came on the heels of the split that occurred yesterday during the party ‘s convention in Abuja.

The outcome of the meeting was not disclosed.

The three leaders also visited the Children’s Church within the Presidential Villa.

While presidential spokeman, Reuben Abati issued a statement later and disclosed the mission of President Yayi, he did not mention what Obasanjo discussed with Jonathan.

Hours after, Obasanjo in a press statement issued Sunday night in Abeokuta and which he personally signed said: ” The situation in our ruling Peoples’ Democratic Party (PDP) after the convention on Saturday and the parallel convention same day has given great concern to all well-meaning members of the party and particularly to the elders of the party.

“While some select elders are making efforts to get the situation resolved as soon as possible, it is imperative to emphasize that the move will bring back peace and return the party to its vigorous and dynamic election-winning party that it has always been.

“I want to passionately appeal to both sides for now to sheath their swords, maintain the status quo, with earliest conveyance of the Elders’ meeting before the end of this week.

“Members are equally enjoined to remain calm until the Elders’ complete their peace-making meeting”,Obasanjo advised.