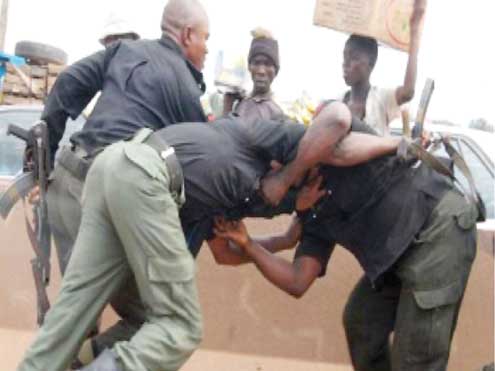 The Nigerian Police in Lagos on Monday charged Abraham Oshoko, 33, before an Ikeja Magistrates’ Court for allegedly taking “offensive“ photographs.

Oshoko, who lives in Idimu, a suburb of Lagos, was accused to have unlawfully taken the photographs of policemen and Lagos State Traffic Management Authority (LASTMA) officials who were performing their ‘legal’ duties.

According to the prosecutor, ASP. Barth Nwaokenye, the accused is facing a two-count charge of taking unlawful picture and causing a breach of the peace.

Nwaokenye said that Oshoko had on 31 August, at Dopemu Round About, Agege, took an offensive photograph of the officers who were performing their lawful duties.

He said the photographs, which were taken without lawful authorisation, were aimed at tarnishing the image of both organisations.

The prosecutor said that Oshoko also conducted himself in a manner likely to cause a breach of the peace.

Nwaokenye said that the offences contravened Sections 57 (4) and 166 (d) of the Criminal Law of Lagos State of Nigeria 2011.

The News Agency of Nigeria (NAN) reported that the offence is punishable with a N90, 000 fines or six months imprisonment.

Oshoko pleaded not guilty to the charge.

The Chief Magistrate, Eniola Fabamwo, granted the accused bail in the sum of N25, 000 and adjourned further hearing till 16 October.

In recent times, Nigerians have been secretly recording on video, policemen taking bribes, in the discharge of their duties.