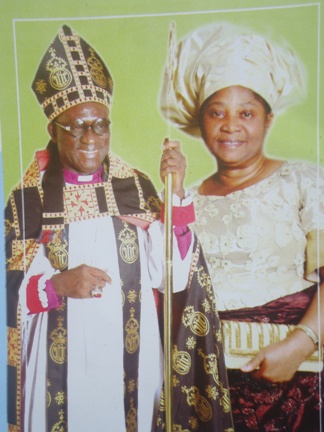 Bishop Kattey and his wife Beatrice

Mrs Beatrice Kattey, the wife of the kidnapped Archbishop of the Ecclesiastical Province of the Niger Delta, Most Reverend Ignatius Kattey has appealed for her husband’s unconditional release.

Bishop Kattey was abducted Friday night in Port Harcourt, Rivers State, along with his wife but she was later abandoned.

For the past five days, no word has been heard from either Archbishop Kattey or his abductors.

Feyii, on behalf of Amaechi, was on a sympathy visit to the family of Archbishop Kattey at their residence in Alode-Eleme in Eleme Local Government Area of the state.

“My husband is a man of God that preaches peace, he believes in God and wherever he is, God is with him, we are sure he will be well, but he should be released”, Mrs Beatrice Kattey said.

Wife of the Anglican Bishop also expressed regrets over the security lapses in the state and called for serious concern and attention to avert future re-occurrence.

Amaechi has, however, enjoined Christian religious leaders to intensify prayers for the unconditional release of the Archbishop Ignatius Kattey.

The Governor said his administration is doing everything humanly possible to ensure the unconditional release of Archbishop Kattey.

“This administration wants to assure you that it identifies with this family because the kidnap of the Archbishop is a very serious matter and it has compelled us to identify with the family, and right now, everything is on track to ensure that Kattey returns to continue his assignment with God”.

Amaechi urged the family of Bishop Kattey to remain strong in their prayers and trust in the Lord for His intervention and release of the kidnapped Anglican Archbishop by unknown gunmen.

Governor Amaechi further appealed to the kidnappers of Bishop Kattey to urgently effect his release to enable him continue his ecclesiastical call to the service of God and humanity, which he stressed, is for the benefit of all Nigerians and betterment of society.

Also speaking at the event, Chancellor of the Diocese of the North, Sir Emeka Ichioku expressed confidence that Archbishop Ignatius Kattey will return to his family unharmed and healthy.

Earlier, Chairman of Clergy Association of the Diocese of the Anglican Communion of Niger Delta North, Venerable Richard Okpara also offered prayers for the family of Kattey and God’s intervention for his unconditional release.