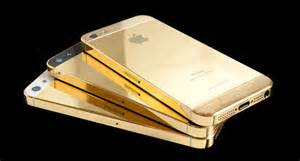 Criticisms have continued to trail the alleged order for 53 gold-plated iPhones 5S mobile handsets by the Federal Government of Nigeria for the commemoration of the country’s 53rd independence anniversary in October.

The lid over the phone deal blew open Tuesday when a UK-based newspaper, The Independent, reported that a British-born businessman, Amjad Ali, who owns Gold and Co. in Dubai said he had instruction from the Nigerian government to supply the exclusive phones at a princely sum of £50,000 per unit and £2.65m (about N682m) in total.

Ali explained that his company would strip each unit of the special devices and “then plate them in copper, nickel and then pure gold.

He said: “We have limited units per region and each is numbered and placed in a handmade wooden box with a certificate of authenticity and wax seal.”

In a curious twist  following the groundswell of disparaging comments by Nigerians against the government, the foreign newspaper, said: “In an earlier version of this article, the founder of Gold and Co. claimed the Nigerian Government had ordered 53 gold iPhones. He now informs Independent Online that the order in fact came from an individual in Nigeria.” The retraction did not, however, stop the condemnations.

Speaking with P.M.NEWS, social activist, Yinka Odumakin, said if the purchase was true, it would be the height of financial recklessness.

“If there is any truth to the allegation that the government is involved in this purchase, it would be the height of financial recklessness, because the expenditure will not add any value to the country. Besides, what is there for us to celebrate at 53?” he asked.

Another activist and writer, Richard Akinnola, described the government’s action “as total insanity.”

Akinnola, who went down memory lane, said that in 1983, people shouted over an expensive champagne specially made for the Chairman of the defunct ruling party, National Party of Nigeria, NPN, Chief Adisa Akinloya, “but now it is Jonathan’s Gold iPhone.”

On his part, National Coordinator, Concerned Human Rights of Nigeria, CHRN, Comrade Declan Ihekaire, described the action as  “totally irresponsible, wicked and a clear statement against the wishes and aspirations of the Nigerian masses.”

Chairman, Coalition Against Corrupt Leaders, CACOL, Comrade Debo Adeniran, said “it shows the profligacy of the Federal Government and its misplacement of priorities. Nigeria is a preponderance of poor people, who live below the standard poverty line and that should be a concern to the Federal Government, rather than giving the outside world the wrong impression that all is well,” Adeniran stated.

“In whose interest is the Federal Government doing that? For over 14 years of democracy, there is no conducive environment for economic activities. What we have are companies closing down and epileptic power supply,” he stated.

The revelation about the gold-plated iPhone deal is coming on the heels of strident public condemnation of the government over its inability to profer solutions to the lingering strike by the Academic Staff Union of Universities, ASUU, insecurity, erratic power supply, infrastructure collapse and rising corruption, among others.

The Federal Government has, however, denied placing order for the procurement of the controversial gold-plated iPhones.

The Federal Government on Thursday in Abuja debunked media report alleging that it ordered 53 gold-plated iPhones to mark the country’s 53rd independence anniversary.

A statement signed by Mr Joseph Mutah, the Press Secretary to the Minister of Information, said the reports were ‘mere’ fabrications.

The statement said the story “is false in its entirety and nothing but a figment of the warped imagination of the authors.”

It said that neither the Federal Government of Nigeria nor any of its agencies contemplated or placed order for gold-plated iPhones for the celebration.

“We, therefore, call on Nigerians and the international community to disregard the story linking the Federal Government with the importation of the gold-plated iPhones.

“The blatant falsehood in the story is one of those mischievous attempts at tarnishing the image of the Federal Government.

“Nigerians are hereby advised to watch out for people intent on blackmailing the government for political reasons,” Mutah stated.

It advised individuals who have enough resources to contemplate importation of such luxury items to invest their wealth in the country for job creation and economic growth.