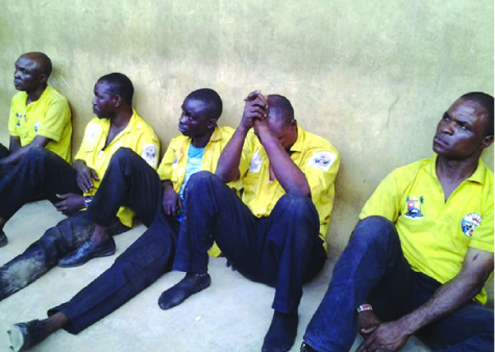 They were caught while allegedly extorting money from motorists in Lagos Mainland, Lagos, southwest Nigeria.

Also arrested in Oshodi are 13 under-aged hoodlums. They were all brought to the taskforce office at Alausa in a Black Maria.

Taskforce Chairman, Bayo Sulaiman, a Chief Superintendent of Police, said the fake LASTMA and taskforce officials issued forged receipts to motorists after threatening them with prosecution.

According to Sulaiman, the suspects were arrested after they had extorted huge sums of money from motorists and residents, saying that local governments could not establish a parallel taskforce with the existing one.

He alleged that the parallel taskforce was formed by the Mainland Local Government to generate illegal income for the council, declaring the act as purely illegal and criminal.

“We got the information about the people who have been parading themselves as the taskforce of the Lagos Mainland Local Government. They have even gone as far as printing fake stickers and copy of the traffic law which they use to threaten the unsuspecting motorists.

they will claim they are taskforce. On getting the information I moved my men there to arrest them,” he stated.

The taskforce chairman also decried the rising cases of under-aged hoodlums who pick people’s bags and handsets in Oshodi, saying that their ages range from 12-15 years.

Sulaiman stated that the under-aged hoodlums would be taken to the Lagos State Remand Home for correction.

He added that the fake LASTMA and taskforce officials would be arraigned in court soon.