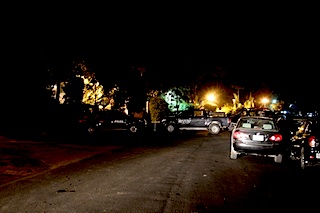 
After widespread public condemnation of the Police blockade of the access road to one of the entrances to Rivers State Government House last night that denied Governor Chibuike Amaechi access, the Rivers Police Command this afternoon removed the blockade.

Simon Lalong,The Chairman of the former Speakers’ Forum and ex-Speaker of the Plateau State House of Assembly,who was among the former Speakers in the entourage of Amaechi when they were denied access called on the National Assembly to urgently call for the resignation of the Inspector General of Police, Mohammed Abubakar over what he described as police impunity in Rivers State.

Lalong said the police may have acted on a directive from the State Police Commissioner Joseph Mbu who takes his instructions from the Inspector General of Police and called for his (IG’s) resignation.

He said what has happened is not really police overzealousness as the police are controlled by higher authorities and requested that people should collectively call for the resignation of the Inspector-General of Police, because as the highest-ranking police officer, the Police Commissioner (Joseph Mbu) takes instructions from the Inspector General of Police.

“ For this level of impunity, I think the National Assembly should start calling for the resignation of the Inspector-General, not even the Commissioner”.

“I was only watching these things (happening in Rivers State) on television and reading in the newspapers but I saw what happened this evening as the highest level of impunity in Nigeria for a governor who has immunity and everything to be stopped on the way blocked by policemen. It means that they are in another way trying to remove his immunity unconstitutionally. So it is really very unfortunate on the side of the police, so we don’t have police protection again”.

Lalong called on the international community to begin to look at this situation “because it is no longer about the governor because if the Governor can suffer such indignity, then the ordinary person will be worse for it.

“I think something must be done in respect to the Nigeria Police that we are funded with taxpayers money. Many of us were afraid when we saw this kind of thing (the roadblock), so if it is happening to the governor who has immunity, what about people who don’t have immunity, so very soon maybe you will see people, they will start arresting people in their houses, so I wonder what is really happening. I think the President must intervene in this issue”, he said.

Rivers State Governor and Chairman of the Nigeria Governors’ Forum, Rotimi Amaechi has condemned the Thursday night Police blockade of the access road to the State Government House, saying that it is the height of lawlessness and impunity.

Governor Amaechi was returning to Government House, Port Harcourt with the Forum of former Speakers of State Houses of Assembly in Nigeria at about 7.00pm after an inspection of numerous projects executed by the governor when it was discovered there was a police roadblock at the Port Harcourt Club junction along Forces Avenue.

Amaechi while receiving the forum on Thursday night in Government, said, “all of you saw how the former Speakers came down from the vehicle to tell them (police) where we were coming from, but the Police resisted. It is for Nigerians to see that we no longer have democracy in this country. We are now in a regime where, the law is no longer supreme. We must rise up against this impunity against our democracy”, Amaechi said.

The Governor has apologized to the ex-Speakers of Nigeria for the embarrassment by the Rivers Police Command.

“I apologize for the embarrassment you suffered during our return from inspection to various projects.”

Also reacting, former Speaker of the Lagos State House of Assembly and ex-Senator Olorunimbe Mamora expressed sadness at the Police action, recalling that Governor Amaechi made the detour to get to the Government House with his guests because he is a responsible citizen.

Senator Mamora said: “I think to say the least that (roadblock) was quite unfortunate because we were coming from inspection of projects, more than 70 former speakers were in the governor’s (Amaechi) entourage to inspect projects and on our way back to the Government House, we discovered that we just couldn’t pass because the road had been blocked and we were wondering of course what was happening only to discover that it was a group of policemen who claimed to be acting on the instruction of the Commissioner of Police here in Rivers State and it was quite unfortunate I would repeat because you would wonder why such a thing would happen”.

He said that Freedom of movement is guaranteed under the constitution and “a situation where you are now compelled without any justifiable reason not allowed to pass despite all our entreaties, all our appeals made to that effect and we thought that as responsible citizens of this country”.