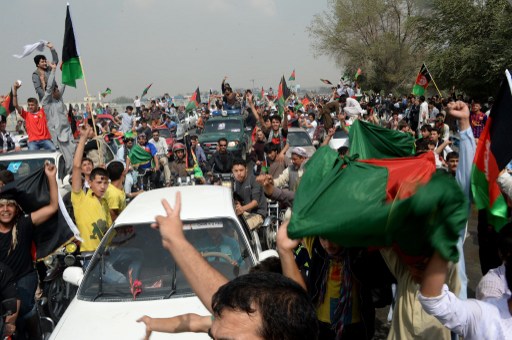 Afghans celebrate their national football team's victory in the South Asian Football Federation Championship, at the Kabul stadium on September 12, 2013.

Bad news is almost synonymous with Afghanistan. If it is not Afghan Taliban bombing Americans or killing people, it is something else.

The exploits of the Afghan national team in soccer has however provided a refreshing difference. The nation is in celebratory mood, not the normal daily melancholic mood that follows each bloodletting.

Afghan President Hamid Karzai on Saturday rewarded the nation’s football team with cash and free flats after winning their first trophy — and piled extra gifts on their heroic goalkeeper.

Celebratory gunfire erupted across Afghanistan when the side won the South Asian Football Federation title in Kathmandu on Wednesday, beating India 2-0 to bring a rare moment of joy to the war-torn nation.

Karzai welcomed the victorious players to his palace in the capital Kabul and announced that each player would receive a free two-room apartment in a new development in the city and 100,000 Afghanis ($1,800) in cash.

Goalkeeper Mansur Faqiryar, who made a series of crucial saves throughout the tournament, was given a larger reward of $20,000 in cash as well as an apartment.

Faqiryar became a national hero after making two penalty saves in the semi-final against the hosts Nepal and repeatedly keeping Indian shots out of the goal in the tense final.

“Since you won the championship, all the people, all the country have been celebrating the victory and are happy,” Karzai told the team, which rose to 132nd in the world rankings after their surprise victory.

“You are the reason for the joy and happiness our people are feeling after all these years of misery, war and disaster.”

The team now hope to match their success in the AFC Challenge Cup to be held in the Maldives next year.

The hardline Taliban, which ruled from 1996-2001 until they were deposed by a US-led international coalition, allowed football but would carry out public executions at half-time at the national stadium in Kabul.