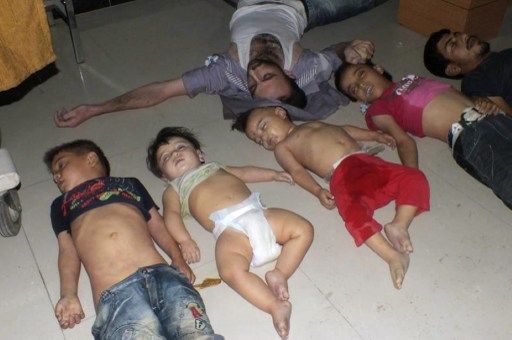 Some of the children allegedly killed by Assad's toxic gas

New York (AFP) The United Nations on Monday revealed what it called “chilling” details of a sarin gas attack in Syria, leaving the major powers to battle over who was responsible.

UN chief Ban Ki-moon condemned the use of chemical weapons in Syria as “a war crime” as the country’s conflict again spilled into neighboring nations, with Turkey saying it had shot down a Syrian military helicopter.

UN experts said they had gathered “clear and convincing evidence” that surface-to-surface rockets took sarin gas into the opposition-held Damascus suburb of Ghouta on August 21.

The United States, which had threatened a military strike on Syria over the attack, says more than 1,400 people were killed in Ghouta.

Ban said the report prepared by the experts “makes for chilling reading.”

He added that the use of sarin had been proved “unequivocally and objectively” and that the Ghouta attack was “the most signficant” with chemical weapons since Saddam Hussein unleashed poison gas in Halabja, Iraq, in 1988, killing thousands.

Ban described how doctors treated civilians with no external signs of injuries in the streets of Ghouta in the hours after the attack and that the weather conditions had maximized the casualties.

“The downward movement of air would have allowed the gas to easily penetrate the basements and lower levels of buildings and other structures where many people were seeking shelter,” Ban said.

“The environmental, chemical and medical samples we have collected provide clear and convincing evidence that surface-to-surface rockets containing the nerve agent sarin were used” in Ghouta, said the report by UN inspectors who were in Syria when the attack was staged.

The experts concluded that “chemical weapons have been used in the ongoing conflict between the parties in the Syrian Arab Republic, also against civilians including children on a relatively large scale.”

Ban would not say who had carried out the attack.

“We may all have our own thoughts on this, but I would simply say that this was a grave crime and those responsible must be brought to justice as soon as possible,” Ban told reporters.

On Friday, he said Assad has “committed many crimes against humanity.”

The United States, Britain and France all insisted that the report shows Assad’s forces had used the weapons.

The US ambassador to the United Nations, Samantha Power, highlighted the use of a 122mm rocket, which she said only government forces had.

She also pointed to the “high quality” sarin used in the attack.

French Foreign Minister Laurent Fabius said there was “no doubt” that government forces were to blame.

Russia’s UN envoy Vitaly Churkin, however, said after a Security Council meeting on the report that there should be more investigation into who was responsible.

Moscow has sided with Assad in blaming opposition rebels for the chemical assault.

The UN experts’ report will now become a key weapon in a Security Council battle over how much of a threat must be made against Assad to make him disarm.

France and Britain will soon send a draft resolution to other Security Council members demanding a threat of sanctions if Assad does not keep to a disarmament plan and for the chemical attacks to be referred to the International Criminal Court, diplomats said.

The council is expected to start negotiations this week.

The French, US and British foreign ministers called for a “strong” resolution after a meeting in Paris.

US Secretary of State John Kerry said: “If Assad fails to comply with the terms of this framework, make no mistake we are all agreed, and that includes Russia, that there will be consequences.”

Kerry and Russian Foreign Minister Sergei Lavrov agreed a plan on Saturday under which Syria’s chemical weapons would be eliminated by mid-2014.

Russia has agreed the plans must be backed by a Security Council resolution but rejects any move to include the threat of force into a UN text.

Lavrov said such threats could kill off hopes of a peace conference on the 30-month-old conflict in which more than 110,000 people, according to activists.

Fighting has worsened in Syria as the diplomatic wrangling goes on and Turkey said it shot down a Syrian military helicopter on Monday after it entered Turkish airspace.

“It was continuously warned by our air defense,” Arinc said, adding there was no information about the fate of its crew because the helicopter fell on Syrian soil.

Arinc said Turkey has changed its military rules of engagement in response to repeated gunfire from the Syrian side.