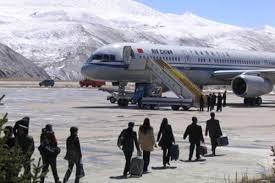 passengers going to board a plane at the world's highest airport

The world’s highest civilian airport has opened at an altitude of 4,411 metres on the Tibetan plateau in the south-western Chinese province of Sichuan, state media said on Tuesday.

The Daocheng Yading airport in Ganzi prefecture’s Daocheng county, or Dapba in Tibetan, launched its first commercial flights on Monday, shortening the travel time from the provincial capital of Chengdu from two days by road to about one hour by plane.

Built in two years at a cost of 255 million dollars, the single-runway airport is expected to boost the local economy by promoting tourism to the Yading nature reserve and other nearby sights, said Yexe Dawa, the Governor of Ganzi.

Daily flights will initially operate between Daocheng and Chengdu, but the government plans to open routes to major Chinese cities such as Chongqing, Shanghai and Guangzhou, the official Xinhua news agency said.

The airport is 77 metres higher than the previous record holder, the 4,334-metre Bangda airport in Qamdo in China’s Tibet Autonomous Region.

Ganzi is a restive area where local Tibetans protesting to uphold their political, religious and cultural rights have clashed with police several times in recent years. (DPA/NAN)