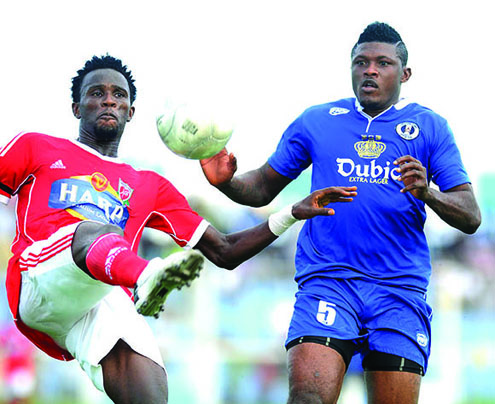 EYES ON THE BALL...Gbolahan Salami of 3SC (right) battle Nelson Ogbonaya of Heartland FC during the 2013 Glo/Nigeria Professional Football League match between 3SC and Heartland FC on 14 April, 2013 at Lekan Salami Stadium, Ibadan

The League Management Committee, LMC, has maintained that 3SC have been docked three points after they refused to continue their match against Sunshine Stars in Akure.

The three points from that game have also been awarded to Sunshine Stars and Shooting Stars forward Gbolahan Salami was fined N100,000 for unruly behaviour during the match.

“We have taken the decision on the match long time ago, that is awarding three points and three goals to Sunshine Stars, as well as the deduction of three points from the points accrued by 3SC,” top league official Salisu Abubakar told MTNFootball.com.

“We called the two parties to hear more on what happened and we deemed it fit to sanction Gbolahan Salami of 3SC because his behaviour that day was very bad. He needed to be cautioned. So he has been fined N100,000 and warned seriously by the board.”

Oluyole Warriors are now bottom of the 20-team league table with 35 points from 31 matches.

Meanwhile, 3SC defender, Mutiu Adegoke has said they cannot afford to be generous with points when they continue their fight against the drop on Wednesday.

The Oluloye Warriors face a resurgent Heartland at the Dan Anyiam Stadium, and Adegoke has warned his teammates that they need to get a good result from Owerri to boost the clubs chances of survival.

He told supersport.com that with determination, they should be able to beat Heartland in Owerri, just as the Naze Millionaires beat them in the first round in Ibadan.

“We are going to Owerri for the three points, as we urgently need them to improve on our position in the league,” he said.

“Owerri is a difficult place to dream big, but Heartland came to Ibadan and scored two goals, so we could equally do the same thing on their ground.

“It is all about determination. At worst, we should be able to avoid defeat.”