Pandemonium in House of Reps as Baraje PDP Visits 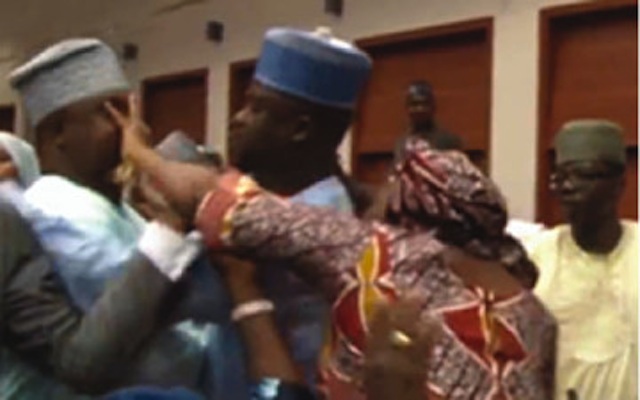 Pandemonium in House of Reps. Photo: The Punch

Members of Nigeria’s House of Representatives returned from their eight weeks vacation on Tuesday and were sucked straight into the crisis rocking the ruling Peoples Democratic Party, PDP.

There have been speculations that the division within the Nigeria ruling PDP which has led to the creation of a faction of the party may result in a major crisis in the National Assembly where the party has majority of members.

Over 50 members of the House and about 27 Senators have already pledged loyalty to the breakaway faction of the party led by Alhaji Kawu Baraje and supported by seven governors elected on the party’s platform.

The speculation became real when Honourable Aminu Tambuwal, the Speaker informed members at the plenary that the leadership of the New PDP would visit the caucus to address them on activities of the party.
He read out the request of the new PDP convened in a letter addressed to the Speaker signed by the secretary of the party, Chief Olagunsoye Oyinlola.

“Those of us in the leadership who are members of the PDP have unanimously agreed to crave the indulgence of this group to visit us. We will listen to them and they will go,” Tambuwal who explained that the meeting will take place after the sitting said.

But the faction loyal to the main PDP led by Alhaji Bamanga Tukur immediately expressed their disapproval of the visit with the shouts of ‘no, no, no.’

As the situation became rowdy, members loyal to the Baraje faction countered with shout of “yes, yes.” The protest lasted for about 20 minutes.

It was later learnt that some members were also protesting what they thought was a neglect of a similar letter of intention to visit members from the Tukur faction.

“I think I need to clarify two points. One, there was a communication from our leader, Alhaji Bamanaga Tukur, on the same issue that he wanted to come and also address the House but he withdrew his letter only this morning and that’s why I did not read it. The whole of this was not supposed to take place on the floor of the House, it is a PDP caucus issue,” Tambuwal said on why he refused to read the letter from Tukur.

A member loyal to the Tukur faction identified as Henry Ofongo from Bayelsa State raised a point of order as members of the new PDP were being introduced to the annoyance of lawmakers on the opposing camp and this resulted in a free for all fight in which chairs and other available objects were freely used.

And his group and other members not favourably disposed to the new PDP shouts of ‘No!No! No!’ and ‘Tukur, Tukur’ accompanied by thunderous claps ensured that it was impossible to hear Baraje’s speech.

Chairs and all available objects were used to hit Ofongo who responded with blows thrown at his attackers. It then became a free for all fight between supporters of the two factions.

House of Rep members from Kano especially led the counter-charge at Ofongo.

Calm was restored briefly when Tambuwal mounted the rostrum to deliver his speech, but as soon as he mentioned “leaders of our great party”, supporters of Tukur faction of PDP took over again, but this time, the chant was” PDP Goodluck! PDP Goodluck!!

While the meeting with the Representatives was characterized by rowdiness, the Baraje faction of PDP and the seven governors had earlier met with Senate President David Mark and other principal officers of the upper chamber in a more convivial atmosphere.

Baraje had listed the demands of his group among other things to include recall of governor Rotimi Amaechi of Rivers State from suspension as well as his recognition as the elected chairman of the Nigeria Governors Forum (NGF).

The group also demanded the reversal of the dissolution of the Party Executives in Rivers and Adamawa states, removal of Alhaji Bamanga Tukur as National Chairman of the party, strict adherence to party constitution and what it described as “third term from the back door.”

In his response, Senator David Mark urged members of PDP to come together to make the party stronger and more united even as he affirmed that he will never defect to any other party.

The Senate President also asked other members of PDP not to leave the party. “We are stronger and better as one big, strong and united party. We need to work together and make our democracy sustainable,” Senator Mark said while emphasizing the need for honesty and objectivity in the search for solutions to problems confronting the party.

He also said law makers elected on the platform of the party will remain united and cohesive and that the leadership of the National Assembly has no intention to declare any member seat vacant on account of the crisis rocking the PDP. Senator Mark said he will stand for justice, fairness and equity in the crisis rocking the party.